President Trump’s announcement that the American embassy in Israel will move to Jerusalem and the ancient city will be recognized as the country’s capital was met with much global outrage and riots in the Middle East. Many in the international community fear the move will set back the ever-fragile peace process between the Israelis and Palestinians. The Palestinians claim East Jerusalem as their capital, making the city a very contentious point in a tinderbox of a region.

Trump’s decision breaks with precedent established by U.S. Presidents in the last 22 years. Every six months a waiver was signed delaying the implementation of the 1995 Jerusalem Embassy Act which would have moved the embassy from Tel Aviv, effectively settling the issue of which city is the true capital.

Historically, when the United Nations divided up the British Mandatory Palestine in 1948, two nations were supposed to emerge – Israel and an Arab-Palestinian state. Jerusalem, a 5,000-year-old city that is central to three of the world’s major religions and had a mixed population was supposed to become an international city. This was supposed to last until the city’s status could be properly negotiated between the Israelis and the Palestinians.

The U.N. General Assembly resolution 181 from November 29th, 1947, outlined that vision of Jerusalem. It was to be managed by the United Nations Trusteeship Council, which would appoint the city’s Governor and draft a 10-year statute. Legislature was to be elected by universal adult suffrage, creating a representative mix. This arrangement would be reviewed by the Trusteeship Council in ten year’s time, followed by a citizen referendum to decide the city’s future. 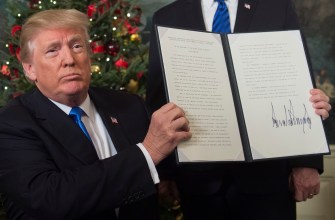 US President Donald Trump holds up a signed proclamation after he delivered a statement on Jerusalem from the Diplomatic Reception Room of the White House in Washington, DC on December 6, 2017. (Photo credit: SAUL LOEB/AFP/Getty Images)

The text of the resolution referred to the situation in “Palestine” in language that would be quite appropriate even today, calling any conflagration there “likely to impair the general welfare and friendly relations among nations”.

Here’s how the resolution explained why the city needed a special status, saying its objective was to:

“To protect and to preserve the unique spiritual and religious interests located in the city of the three great monotheistic faiths throughout the world, Christian, Jewish and Moslem; to this end to ensure that order and peace, and especially religious peace, reign in Jerusalem,” stated the resolution.

Another objective included fostering “co-operation among all the inhabitants of the city in their own interests as well as in order to encourage and support the peaceful development of the mutual relations between the two Palestinian peoples throughout the Holy Land; to promote the security, well-being and any constructive measures of development of the residents, having regard to the special circumstances and customs of the various peoples and communities.” 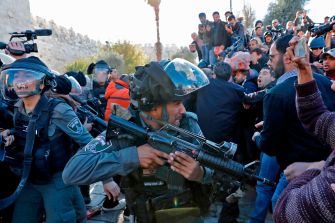 Israeli forces scuffle with Palestinians at Damascus Gate in Jerusalem’s Old City on December 8, 2017. Palestinians clashed with Israeli security forces after calls for a ‘day of rage’ as US President Donald Trump’s declaration of Jerusalem as Israel’s capital sent shockwaves through the region for a second day. (Photo credit: THOMAS COEX/AFP/Getty Images)

The war that broke out upon Israel’s formation prevented this turn of events, with Jerusalem split between Israel in the western part and Jordan in the eastern sector. Israel took over East Jerusalem as result of the Six Day War in 1967 and declared Jerusalem its capital in 1980. The international community has generally not recognized that as fact, however, looking for a final determination of status as part of a peace settlement. This position was reaffirmed by the December 8th meeting of the U.N. Security Council.

Can Jerusalem be considered an international city today, in the current political climate?

Here’s a telling recent video of what Israelis think about that question, with most very skeptical of the idea, citing security concerns and fears that an international government will not have the interest of the Jewish Israelis at heart.

Related
Health
The scientific highs and lows of cannibinoids
Hundreds of these cannabis-related chemicals now exist, both natural and synthetic, inspiring researchers in search of medical breakthroughs.
Strange Maps
The horrors of World War II air war, in one stark map
This graph shows how badly German cities were hit by Allied bombing raids.
Hard Science
Subatomic ghosts shed new light on the structure of protons
A Fermilab study confirms decades-old measurements regarding the size and structure of protons.
The Present
The Taoist philosophy behind Alibaba, China’s e-commerce giant
Alibaba has played a key role in China’s meteoric economic rise.
The Well
Can we condition ourselves to be heroes?
Neuroscientist Robert Sapolsky on the science of temptation, and the limitations of your brain’s frontal cortex.
▸
6 min
—
with
Robert M Sapolsky
Up Next
Culture & Religion
Which Sex Makes for Better Athletes, Men or Women? Science Has the Answer
The results of this study could change how we approach athletic training.