In the wake of a fatal self-driving car accident in March, a survey from AAA found that 73 percent of Americans are afraid to ride in autonomous vehicles–an increase from 63 percent compared to a few months prior.

Autonomous car manufacturers are doing everything they can to make riders feel at ease. But what about pedestrians crossing the street? How will they feel when the world’s streets begin to flood with self-driving cars? After all, technologists and philosophers have raised no shortage of thorny ethical questions about how autonomous cars should be programmed to behave when faced with an imminent and unavoidable accident: Should it minimize harm to the driver or, say, four people sitting at a table on a cafe patio?

In an effort to begin putting pedestrians at ease, Jaguar Land Rover’s Future Mobility division is testing out a silly-looking yet seemingly effective strategy: give cars googly eyes that follow pedestrians to let them know the car ‘sees’ them. 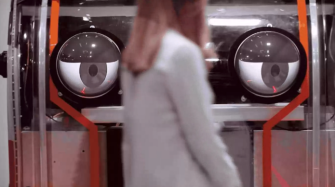 “It’s second-nature to glance at the driver of the approaching vehicle before stepping into the road,” Pete Bennett, Future Mobility Research Manager at Jaguar Land Rover, said in a statement. “Understanding how this translates in tomorrow’s more automated world is important. We want to know if it is beneficial to provide humans with information about a vehicle’s intentions or whether simply letting a pedestrian know it has been recognised is enough to improve confidence.”

At a Jaguar factory in Coventry, England, the company built a model town and had self-driving four-wheeled pods navigate through fake streets and crosswalks, stopping for pedestrians along the way. Some of the autonomous were outfitted with googly eyes, some weren’t.

Jaguar asked cognitive scientists to measure the reactions of more than 500 participants as they walked in front of the pods. The results showed that pedestrians were more likely to trust cars with human-like eyes, though the company hasn’t said how it measured the reactions.

The company said its recent tests are part of larger study that explores how “autonomous vehicles can replicate human behaviour and reactions when driving.”

“Overcoming millions of years of evolution in a few decades is simply not an option,” the company wrote in the statement. “As humans we thrive on reading other faces, trusting them, making judgements. With the rise of digital communication we have to employ a much higher degree of cognitive processing to interpret the tone of written email or the intonation of a voice. A face gives us hundreds of tiny clues and therefore requires less cognitive processing power.”

They say that nobody understands quantum mechanics. But thanks to these three pioneers in quantum entanglement, perhaps we do.
Up Next
Politics & Current Affairs

A seismic shake-up at a venerable literary gatekeeper. Shallow and not-so-shallow consumerism. The Paris Review’s new editor on old ghosts, new voices, and what’s worth keeping.