New data shows Americans haven’t a clue how stunningly massive the wealth gap in their country really is. An excellent video blowing up on YouTube depicts this disparity and explains how badly Americans tend to underestimate it. No matter how many statistics you’ve read on the subject, the video deserves six minutes of your time:

To summarize the video’s data:

• The richest 20 percent of Americans hold 84 percent of the nation’s wealth, while the bottom 40 percent have less than 1 percent.

• Americans believe their country is much less inegalitarian than it really is.

• The top 1 percent have a bigger slice of the pie (40 percent) than nine of out 10 Americans believe the top 20 percent should have.

• While the top 1 percent command 40 percent of the wealth, the bottom 80 percent have a measly 7 percent.

• The top 1 percent “own half of the country’s stocks, bonds and mutual funds. The bottom 50 percent of Americans own only half a percent of these investments.”

• “The average worker needs to work more than a month to earn what the CEO makes in one hour.”

Putting it all together, the wealth distribution in the U.S. looks like this (note that the top 1 percent is, literally, off the chart): 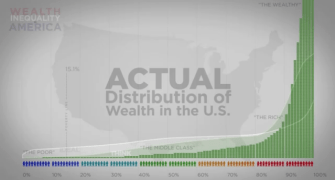 The video concludes with this call to arms:

We certainly don’t have to go all the way to socialism to find something that is fair for hard-working Americans. We don’t even have to achieve what most of us consider might be ideal. All we need to do is wake up and realize that the reality in this country is not at all what we think it is.

There’s the rub. If the 2.2 million+ viewers of the video were to expand, Gangnam style, to all 311 million Americans and everyone finally saw with clear eyes just how vast wealth inequality truly is in their country, things would change, right?

Maybe, but I seriously doubt it. Even leaving aside Republican resistance to measures that could dent the wealth gap, many Americans would likely remain opposed to policies that would be necessary to seriously address the problem. The apparently most efficient mechanism for redistributing the pie is a tax on wealth like the “solidarity tax” (impôt de solidarité sur la fortune) in France: citizens with a net worth surpassing 1 million Euros are asked to fork over 0.25 percent of the value of their property every year; the annual levy rises to 0.5 percent for fortunes over €3 million. Such a measure cannot be implemented in the United States: Article 1, section 9, clause 4 of the U.S. Constitution explicitly prohibits “direct” taxation. Should we try to amend the Constitution to permit direct taxes? Well, we could, but if the American experience is anything like that of France, the wealth tax will not actually have a significant redistributive effect, and the 1 percenters would move to Canada to keep their assets intact. That would smooth out the curve at the top without improving the lives of poor and middle class Americans a bit.

Short of a wealth tax, then, how could we bring the American distribution more in line with what Americans would like? Judging by the tenor of his State of the Union address, President Obama seems committed to chipping away at the inequalities in American society by expanding opportunities for preschool and raising the minimum wage, among other proposals. Policies like these may help reduce wealth inequality to some limited extent, but the problem is much too big and too entrenched in American society to resolve with small-bore solutions. Without fundamental changes to the income tax code eliminating “stealth” subsidies for corporations, further raising rates on the wealthy and hiking the estate tax (something Obama has given up on), there is little on the horizon that has a good chance of bridging the rich-poor rift.

Maybe we really do need a socialist revolution.

There’s an extremely good chance that there is, or at least was, life on Mars. But is it native to Mars, or did it originate from Earth?
Up Next
Culture & Religion

Those who use smartphones and tablets are still expected to pay the tax — which is mandatory for all TV owners — if they’re accessing content normally found on TV.