The internet now plays such a large role in daily life that it’s difficult to imagine many people getting by without it. This is especially true in advanced economies where banking, shopping, communicating, and viewing culture and entertainment are all facilitated with a connection to the Web.

Yet 15 percent of Americans still do not use the internet, according to a poll from the Pew Research Center. That’s the same level as three years ago despite government and community efforts encouraging people to get online. 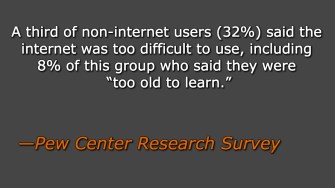 Perhaps it’s more surprising, however, how much internet use has grown in American in the last 15 years. In the year 2000, says Pew, an astounding 48 percent of Americans still were not using the internet. Today, rates of non-internet use have fallen by one-half and two-thirds among the elderly and those without a high school diploma, respectively.

The increase in Internet use is due in large part to the proliferation of smartphones, which have become the primary means for many people in disadvantaged populations to go online. But that access isn’t sufficient and limits the amount a single user can achieve online. 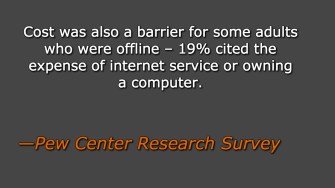 Yet the elderly and the poor, as well as people living in rural areas, are the least likely to be using the internet today.

That a digital divide exists along lines of age, income, and education is real cause for concern precisely because internet access has become so commonplace and is so easily taken for granted. Those without easy internet access risk being forgotten as new technology charges forward that the rest of the population is eager to adopt.

The extent to which people cannot benefit from the services the internet provides is certainly an argument in favor of the FCC’s recent decision to legally treat online connectivity as a public utility. No word yet, however, on when it will protect your Internet bill from getting shut off.

Unlike other world rulers, Genghis Khan was laid to rest not inside an elaborate mausoleum but an unmarked grave somewhere in Mongolia. Maybe.
Videos

What’s one of the most reliable indicators that a first date is going well? The answer might lie in how closely the couple is matching each other’s behavior and physiology. […]
Up Next
Culture & Religion

Our Evolving Ethics on Animals

The separation between our reality and the reality of the rest of animal life — the “man given dominion” nonsense — is a façade that’s slowly eroding.