Last week, tech websites went nuts when announcing Starbucks will soon be accepting bitcoin. The notion of purchasing a Frappuccino with cryptocurrency was too seductive a headline to miss. Over the weekend, Starbucks clarified its position: no, it is not accepting bitcoin, but yes, it is working on implementing a conversion program that will exchange your crypto for cash.

But for how long? You might not yet be able to exchange crypto for caffeine, but that day is approaching. What those Friday articles revealed is telling: Intercontinental Exchange (ICE), the owner of the New York Stock Exchange, is launching its own blockchain, Bakkt. The Fortune 500 company has already announced partnerships with Starbucks, Microsoft, and BCG. With the digital assets marketplace valued at $270 billion, it’s not surprising big players would infiltrate; one selling point for ICE is its longstanding ties to international regulatory bodies, propelling it well in front of the competition.

The move has profound implications for the future of blockchain. Marco Santori, President and Chief Legal Officer of Blockchain.com, called it the “Wall St troll of the century.” He recognizes both edges of this sword. First, such a massive financial player stepping into cryptocurrency implies “enormous validation of the crypto asset class.” Yet it could destabilize current industry players.

Stability is a key factor in utilizing cryptocurrency. Right now, value fluctuates too wildly for retail to rely on. Mining fees could exceed the price of a beverage, depending on when it is purchased. And the biggest hurdle to date: the transaction could take minutes, which is antithetical to the Starbucks (or most any retail outlet) ethos. If you think waiting behind someone writing a check at the supermarket is annoying, just wait until someone in front of you blankly stares at their digital wallet awaiting verification.

This technological hurdle will soon be solved. Blockchain offers the potential for secure and inexpensive transactions. (Security of the wallets and private keys is another story; over $1.6 billion has been stolen since 2011.) Fear of a decentralized digital currency traded on a platform few understand is quickly giving way to the most natural of human traits: curiosity. Two years from now almost every company will move some aspect of their business onto a blockchain simply because everyone else is doing so.

According to research cited on VisualCapitalist, 60 percent of Square merchants would accept bitcoin over cash, while 40 percent of U.S. citizens are open to using cryptocurrency for everyday transactions. Last year the number of retailers accepting crypto grew by over 30 percent, for a total of 11,291 stores worldwide. The main hurdles to mass market usage are price volatility, slow transaction time, and high transaction fees—all three of which are being addressed as we speak. 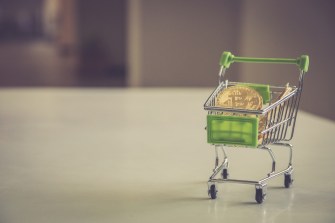 Provided that wallets and e-currency companies are careful with the release of their DApps—the infamous Ethereum heist of 2016, which resulted in $50 million stolen and a contentious fork of the cryptocurrency, was due to one capital “T” instead of a lowercase “t” in line 666 of the code—there’s no reason crypto won’t be used widely. Financial giants already know this: the launching of Bakkt, sure, but also the fact that Bank of America holds more blockchain patents than any other company.

This is, of course, the opposite of what blockchain inventor Satoshi Nakamoto envisioned when he/she/they launched Bitcoin in 2009. During the height of the U.S. housing crash, cryptocurrency was specifically designed to counteract the accumulation of wealth due to centralization, an ideology that traces its origins to early Internet anarchist collectives. The decentralized nature of blockchain was a response to the “Too Big To Fail” mentality applied to modern banking institutions. By contrast, Bakkt plans to operate on a layer above the blockchain, akin to a lightning network. You can only accomplish this if you have the financial might behind you to absorb potential losses.

Yet for crypto to be accepted broadly it must be integrated into the existing system, which means public and private must co-exist. This too invokes tribal mentalities, as is the case with the Ethereum-Ethereum Classic and Bitcoin-Bitcoin Cash forks. Purists dedicated to upholding the vision of decentralized identity verification and financial transactions will seek out those solutions, while the majority of people will be drawn to businesses they already use, even if they don’t necessarily trust them.

Which, in the short term, means blockchain has a few years of growing pains ahead. But for this Web 3.0 to succeed such discomfort is inevitable. Humans have long used a variety of objects as currency, from avocados and cattle to grains and leather—even chocolate. Americans rarely carry cash as it is. Though cryptocurrency is often created to service the specific DApp its tied into, the implementation of general-use crypto is arriving soon.

Ancient humans may have evolved to slumber efficiently — and in a crowd.
Up Next
Personal Growth

How to tell the difference between persuasion and manipulation

Why is manipulating people morally wrong but influencing them is not? Here’s the fundamental distinction between manipulation and non-manipulative influence.