Like many Americans, I struggle with my weight and have trouble losing it. I’ve always had something of a belly. Exercise and dieting have left me frustrated. I usually hit a wall after losing about 20 lbs. or so. A new study finds that it might not be my lifestyle, but my genetic makeup. The results were published in the journal, Proceedings of the National Academy of Sciences(PNAS).

First, let’s be clear. The scientists in this study do peg the growing worldwide obesity epidemic, going on now for the past 40 years or so, to over-nutrition and an increasingly sedentary lifestyle. Even so, “numerous familial studies also provide strong evidence for heritable contributions to obesity,” study authors write. Over 100 genes have somehow been implicated. But how much they impact weight and how they work exactly has been unclear, until now.

So it may be a poor diet and little exercise that makes us overweight. But stubborn weight loss might not be. I mean, we can’t be held responsible for how our body stores fat. As a result, society may have to change its perception on what’s healthy and attractive and what isn’t. Because some people just might be more naturally curvy than others. How do we know? Researchers found a certain genetic mutation which tells our body to store much more fat than necessary. And millions of Americans have it. 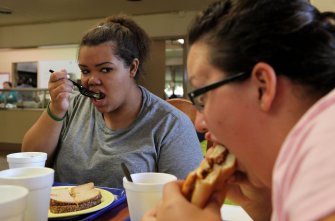 Although what you eat and how much you exercise are important, how much fat your body stores and how quickly you lose weight may be up to your genetic code. Credit: Getty Images.

This mutation at one time was helpful for our species. In the dawn of humanity and perhaps during other periods of history, food wasn’t always plentiful. So building up a nice layer of fat could help you survive the lean times, whereas others might fall away. Today however, there’s a stigma against being overweight, regardless of one’s biological situation. And of course it’s worse for women than men.

Dr. Vann Bennett was the senior author on this study. He’s a professor of biochemistry at Duke University. Bennett worked with Damaris Lorenzo, an assistant professor of cell biology. She hails from the University of North Carolina, Chapel Hill. Although it was discovered in mice, researchers believe this mutation is present across many mammalian species, including our own.

This study surrounds the gene ankyrin-B. Dr. Bennett discovered this gene, and a former PhD. student noticed that mice who had the mutation were fatter than those who didn’t. All a gene is, is a set of instructions on how to make a certain protein. This particular gene’s protein connects a cell’s membrane to other important proteins, and can be found in almost every tissue in the body.

There’s one problem however, no one knows how the gene works. The leading theory today is that obesity has to do with appetite control centers in the brain. Dr. Bennett wondered whether the problem emanated not from the head but elsewhere. 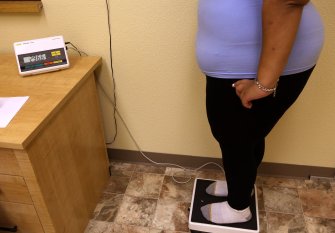 Ankyrin-B may serve as a biomarker for stubborn weight loss. Credit: Getty Images.

What scientists did in this study was “design” mice, by injecting their DNA with the human variant of the gene ankyrin-B. Then a surprising thing happened. The mice grew fat and quickly. Looking more closely, researchers found that these mice had fat cells that were twice as big as normal ones. Instead of burning calories, their bodies were storing more of their energy as fat. This occurred even though these mice were still eating the same portions and exercising as much as they were before. “We call it fault-free obesity,” Dr. Bennet said.

Now, researchers believe changing or suppressing the ankyrin-B mutation could prevent a common, unhealthful cascade which often leads to a serious condition. According to Prof. Lorenzo, “We quickly learned that the increased accumulation of lipids in fat cells ‘spilled over’ to the liver and muscles.” This is similar to what’s seen in humans where an “abnormal accumulation of fat” as Dr. Lorenzo put it, leads “to inflammation and disruption of response to insulin, a hallmark of type 2 diabetes.”

If future research holds up, this gene could become a biomarker for those who are at-risk for body weight issues, and may help researchers develop gene therapies to get stubborn weight loss under control. These scientists estimate that today, 1.3% of white Americans and 8.4% of African Americans carry this genetic mutation. “The problem is, we still didn’t know how this gene worked,” Dr. Bennett said. Next, he and colleagues plan to identify humans who carry this gene variant and find out how it affects their metabolism.

To see how one company is marrying genetic information with weight loss, click here:

Stoicism says that we should change what we can, endure what we must. The company we keep is something we can, and often should, change.
Up Next
Technology & Innovation

Terrorism. Technological disruption. Globalization. Life in the 1870’s was wild. Harvard historian Maya Jasanoff on Joseph Conrad, his times, and ours.