The use of chemical poisons against animals in agriculture takes a huge environmental toll. The toxic chemicals accumulate in the food chain and become harmful or fatal to both humans and other animals resulting in loss of biodiversity in many areas. At the same time, every year farmers lose billions of Euros as a result of birds, rodents, and other animals that eat and destroy crops.

An EU-funded project called LIFE Laser Fence is addressing this problem by substituting the use of poisons with an innovative laser technology that will shoo animals away without causing them any harm.

The laser technology is developed by Bird Control Group – a Netherlands-based company whose product Agrilaser has already proven to effectively control birds. 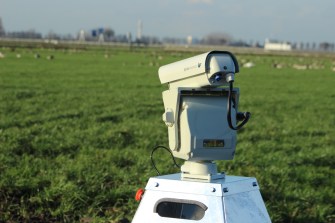 The technology is considered to be environmentally friendly as it steers the birds away without causing them any harm or producing any noise. A pilot implemented in an Australian vineyard resulted in 80-90% bird reduction. Furthermore, the birds don’t get used to the lasers and eventually stop coming to the farm. Similar approach will be used by the LIFE Laser Fence project, using lasers to create a virtual fence for containing animals in an area or keeping them out of a defined range.

With a budget of a little over €3 million ($3.3 million), about half of which is provided by the EU, the new technology will be tested over the next three years in the UK, Spain and the Netherlands as part of the LIFE EU program supporting environmental, nature conservation and climate action projects throughout the EU. The main objectives of the LIFE Laser Fence project are to eliminate rodenticide use, decrease crop losses by half and create awareness for the negative effects of chemicals and their impacts on the environment.

The project is a multi-national collaboration between six partners amongst which a UK university, a Spanish company that specializes in animal-detection via drones, and a global food industry player. Dr Alex Mason, the project leader and an expert in sensor technologies says,

“There is a strong European desire to eliminate poisons entirely. Coming up with a solution that fits both national and European policies means massive impact for the European economy and environment.”

The partnership creates further possibilities, such as the laser laboratory that was created for the project. According to Mason it will become a place for experimentation with more innovative techniques and tests on a larger scale for even greater impact.

Ask Ethan: Could the Universe be a simulation?

IBM’s Four Qubit Square Circuit, a pioneering advance in computations, could lead to computers powerful enough to simulate a Universe. Image credit: IBM research.And if it were, is there any […]