Experts are warning that an eight-ton Chinese space laboratory that has a deteriorating orbit path will likely crash into Europe in early April—but there’s a bit of disagreement on exactly when and, indeed, where.

Tiangong-1 is a satellite laboratory that contains large amounts of hydrazine, which is a toxic and flammable chemical that can wreak all kinds of havoc on the human body, including poisoning the blood, kidneys, lungs, the central nervous system, and damage to eyes, nose, mouth, and respiration. It can also produce severe burns on the skin.

America’s Aerospace Corporation (AAC) predicts the first week of April for re-entry and the crash landing of some of the pieces, while the European Space Agency (ESA) has a much larger window of March 24 to April 19.

While it’s not clear just how much of the craft will incinerate on the way to Earth’s surface, AAC is predicting some of the chunks will survive—and if they do, they will scatter over the span of a few hundred kilometers.

The ESA is predicting that “Reentry will take place anywhere between 43ºN and 43ºS (e.g. Spain, France, Portugal, Greece, etc.). Areas outside of these latitudes can be excluded. At no time will a precise time/location prediction from ESA be possible. This forecast will be updated approximately every week in January and February.” However, a fresh report on this story is saying it could even end up in Northern U.S. states. 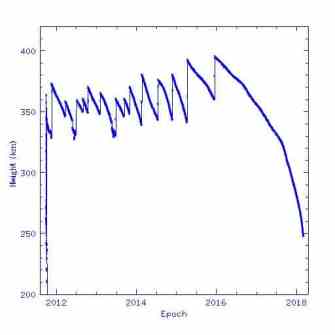 After the craft lost radio connection with China’s Space Agency after being launched in 2011, it began to slip into a lower and lower orbit, and it just started dipping into Earth’s atmosphere.

A somewhat alarming warning from Aerospace Corporation’s Center for Orbital and Reentry Debris Studies (CORDS) states: “Potentially, there may be a highly toxic and corrosive substance called hydrazine on board the spacecraft that could survive reentry. For your safety, do not touch any debris you may find on the ground nor inhale vapors it may emit.”

While craft like this frequently pass through Earth’s atmosphere, the concern is that this one is particularly large.

Jonathan McDowell, an astrophysicist from Harvard University, seems a bit less worried about the satellite than some, but he still has a note of caution, as he told The Guardian. “Every couple of years something like this happens, but Tiangong-1 is big and dense so we need to keep an eye on it.”

Related
Starts With A Bang
The sober truth about finding the Universe’s first stars
The Universe certainly formed stars, at one point, for the very first time. But we haven’t found them yet. Here’s what everyone should know.
Life
Our antidepressant drugs are affecting animals and ecosystems
A toxicologist explains the impacts of antidepressants on fish — and no, they’re not getting any happier.
The Past
Ancient migration: Bering Strait land bridge from Asia to North America was not a one-way road
Ancient humans crossed the Bering Strait land bridge from Asia into North America. But some of them went back.
Sponsored
Want to boost your happiness? Buy experiences, not material possessions
Some experiences continue to pay dividends time and time again.
High Culture
Did Paul Cézanne hide an early self-portrait underneath a 160-year-old still life?
To answer that question, we may have to figure out when the famed painter started to go bald.
Up Next
Surprising Science
Why Silicon Valley elites swear by ice baths and “positive stress”
So-called ‘positive stress’ has been growing in popularity among Silicon Valley workers.