We take it for granted, that the Big Bang created the universe. But did it? Although that’s been the commonly adopted model for the last 50 years, not all scientists back it. In fact, there are other theories for how the universe and everything came into being. (And no, the answer isn’t 42). Could our universe have been born out of an alternate space-time bubble? One Brazilian mathematician thinks so.

He’s recently proven Bardeen’s mode is at least theoretically possible, to explain the nature of our entire cosmos. In this view, there was no Big Bang. Instead, our universe sprung out of the dying husk of an older one, after undergoing a period of contraction. Rather than a linear model, the universe in this view is cyclical in nature. It goes through periods of consolidation and expansion.

Physicist Juliano César Silva Neves hails from University of Campinas’s Mathematics, Statistics & Scientific Computation Institute (IMECC-UNICAMP), in Brazil.  He recently boosted the profile of what’s known as the bouncing cosmology, in a paper published in the journal General Relativity and Gravitation. The theory isn’t new. It’s a century old. But it’s fallen in and out of favor since. 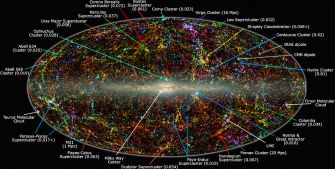 Panoramic view of the entire near-infrared sky, showing many of thefamiliar galaxy clusters/super-clusters in our local universe. Credit: NASA.

What’s different here is that the mathematician eliminates the need for the problematic singularity. This is the phase supposedly preceding the Big Bang, when the universe was a speck of concentrated energy and matter, giving off immense heat. The problem is, during the singularity both relativity and quantum mechanics break down. Neves hints at physicists being uncertain this phase ever took place. That squares with its definition. The word singularity comes from a mathematical term meaning indefinite. There are other inconsistencies within the Big Bang theory as well.

For instance, there is way more isotopic homogeneity in the universe, say in the cosmic microwave background, than should exist and that’s been difficult to account for. Neves uses black holes to support this radical theory. “There are two kinds of singularity in the Universe,” Neves said. “One is the alleged cosmological singularity, or Big Bang. The other hides behind the event horizon of a black hole.”

A black hole is born out of a collapsed star. The star’s core—having run out of fuel, implodes, leaving a singularity which here is a point of infinite density and intense gravity. Once something gets caught in its event horizon or the point of no return, nothing can escape, not even light. The gravity is just too great.

American astronomer Edwin Hubble first proposed the Big Bang theory in the 1920s, after he found that galaxies are moving away from one another. This means that they all must’ve had the same origin, which began 13.78 billion years ago, when the singularity is said to have taken place. 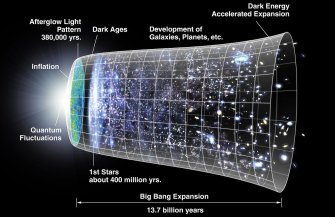 Did the Big Bang even occur? Credit: NASA.

Once Einstein came around, we had a more precise way to explain how the cosmos operated. So in the 1940s, physicists began putting together a model of how the universe looked in each phase of its timeline from the Big Bang onward, by working backward. From there, they hypothesized one of three possible models for the future, either the universe stops expanding and becomes static, at some point, it continues to expand at an ever-increasing rate, or it begins to slow down and then contract, what’s known as the Big Crunch.

American physicist James Bardeen, a two-time Nobel Prize winner, found a novel solution to the problem of a singularity within certain black holes. Bardeen shared the prestigious prize with two other scientists for inventing the transistor, arguably the most important invention of the 20th century, and later by himself for explaining the phenomenon of superconductivity.

Bardeen performed a particular mathematical trick within general relativity equations. Today, astronomers say “regular black holes” don’t have a singularity behind their event horizon. What Bardeen showed was that the mass of a black hole’s heart isn’t constant, as it is within a singularity, but a function of how far away one is from the center. In this paper, Neves builds on Bardeen’s work. But he took it one step farther and applied this mathematical trick to the entire universe. 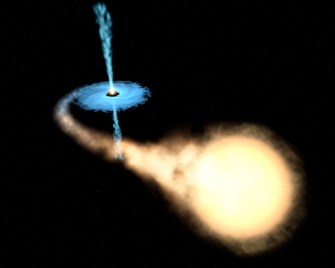 “Regular” black holes operate without a singularity. Could the universe? Credit: Getty Images.

Where Bardeen introduced a scale to explain the goings on inside a regular black hole, Neves and his postdoctoral supervisor, Prof. Alberto Vazques Saa, introduced a “scale factor,” into general relativity equations, to explain the rate at which the universe is expanding. Once the scale factor is introduced, the singularity and the Big Bang disappear. Universal expansion works just fine without them.

Instead of a singularity, in this view, the universe expands to a certain point, then reverses course. Then it goes through a period of contraction, until energy and matter build up to a certain point where they can no longer tolerate each other, and repulse one another, leading to an expansion or bounce. This cycle continues perpetually. It’s an unconventional theory for sure. Until there’s some hard evidence, some scars of our last expansion for instance, it’ll remain so. What kind of evidence would be required?

“Remnants of black holes from a previous phase of universal contraction that may have survived the bounce,” Neves said. “Did the Universe have a beginning, or did it not? Does the world end inside a black hole? Today, we know the theory of general relativity permits a non-singular cosmology, with no Big Bang, at least in theory.”

For a comprehensive explanation of what we do and don’t know about the universe, click here:

Related
The Future
How the metaverse will revolutionize K-12 and higher education
Imagine going on a tour through the human circulatory system as a tiny cell. That is just one example of education in the metaverse.
Starts With A Bang
Ask Ethan: What are white holes, and do they really exist?
In General Relativity, white holes are just as mathematically plausible as black holes. Black holes are real; what about white holes?
Life
Strange life forms create an “alien” ecosystem in an abandoned uranium mine
Slimy biofilms made up of bacterial and eukaryotic life forms have taken over an abandoned, flooded uranium mine in Germany.
Hard Science
Earth has an eerie “sodium glow,” and astronomers use it to image stars
Air currents in our atmosphere limit the resolving power of giant telescopes, but computers and artificial stars can sharpen the blur.
Health
How saliva changes the flavor of food
“It’s a liquid, but it’s not just a liquid.”
Up Next
Technology & Innovation
Space Dust Could Be Bringing Alien Life to Earth
Life never ceases to surprise, even when faced with the unforgiving environment of space.