If you had to guess why McDonald’s is adding self-serve kiosks to 1,000 stores every quarter for the next two years, what would you say?

You might think having to pay fewer employees—and at the same time, pay them a sub-living wage—is one, but the reality is this: You and I buy more stuff when presented with such devices. It’s all about the psychology. 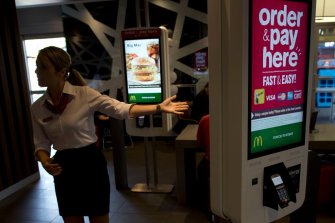 McDonald’s unveils its new concept in Toronto. You can now order at a kiosk, build your own burger and receive table service. (Lucas Oleniuk/Toronto Star via Getty Images)

The kiosks allow people who order something to easily customize what they want (as opposed to the usual one-burger-fits-all method) as well as asking for what it calls “table service”—having workers bring the food to their table as they sit and wait. In this way, the company claims that there will be no job losses. The Panera chain has done exactly this; jobs there include delivering to the tables, cleaning after diners leave, and creating fancy coffee drinks as well as preparing a variety of foods.

In fact, McDonald’s CEO Steve Easterbrook explained the real reason why they’re doing this: “What we’re finding is when people dwell more, they select more. So there’s a little bit of an average check boost.” That could be as much as 5-6% the first year.

A 2017 study compared spending attitudes on desktop versus touch screens and found that the physical experience of touching products—even on screen—increased the likelihood that a consumer would make a “hedonic” purchase. “When a consumer uses a touchscreen device, the novelty and fun generated by finger movements create experiential and affective feelings, in alignment with the playfulness and emotional nature of hedonic products,” the study authors wrote.

The McDonald’s kiosks have been in testing since 2003 in the United States. In Canada, the U.K, and Australia, the systems have already been installed in most franchises of the chain.

Easterbrook claims, “We can’t get there quick enough in the U.S.” 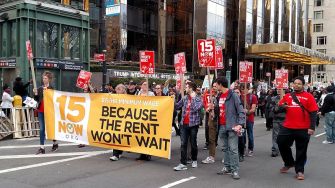 This should not affect the fight to increase the minimum wage—especially if, in the end, it actually means a boost in staff at the restaurants; that simply means more workers can join the fight.

So, any bets on how quickly the systems are hacked? Perhaps similar to the way folks in the U.K. have with automated, worker-free checkouts at grocery stores, where they ring it all up as carrots?

Related
Life
Scientists use CRISPR to insert an alligator gene into a catfish
Disease kills off 40% of farmed catfish. This gene protects them.
Neuropsych
How you breathe affects your brain
Your breathing rhythm influences a wide range of behaviors, cognition, and emotion.
Health
What happens when regular porn watchers abstain for a week?
Researchers watched for signs of withdrawal — but didn’t find any.
Neuropsych
Daily caffeine intake temporarily alters your brain structure
Compared to people who took a placebo, the brains of those who took caffeine pills had a temporarily smaller gray matter volume.
Thinking
Why you should laugh at yourself, according to Seneca and Nietzsche
“It is more human to laugh at life than to lament it.”
Up Next
Politics & Current Affairs
Canada set to legalize marijuana, provide $6bn annual boost to GDP
On June 7th, the Canadian Senate will vote on Bill C-45. It is expected to pass, making Canada the first of the G7 nations to legalize recreational marijuana.