What if you could just regrow a lost or unwell limb? While this medical feat could benefit millions, the military is taking the lead. It hopes to find a solution to the frequent amputations that befall soldiers, especially those fighting in Afghanistan and Iraq where the prevalence of roadside bombs and terrorist activities makes horrible damage to limbs a frequent reality. One particular area the military researchers are focusing on is figuring out how animals like salamanders are able to regrow limbs.

Many of our ideas and designs have been inspired by observing the animal kingdom. Could the key to regrowing organs be the next crucial knowledge we glean?

“We’re not quite there yet,” said Saunders. “What we’re trying to do is develop a toolkit for our trauma and reconstructive surgeons out of various regenerative medicine products as they emerge to improve long-term outcomes in function and form of injured extremities.” 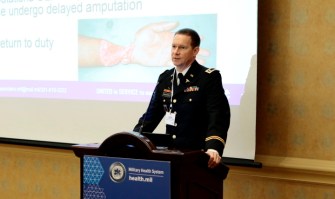 Saunders explained that even as there’s been much progress in using synthetic grafts in regrowing muscle, nerve, and other tissues – the result is not as good yet as the original organs.

“We would like it to be as restorative as possible, resist infection … and be durable,” said Saunders. “This is going to be implanted in young people who may go on to live another 60 to 70 years.”

There is an estimated 2 million amputees living in the U.S. right now, according to stats from the Amputee Coalition of America. Globally, the annual number of amputations is more than a million. 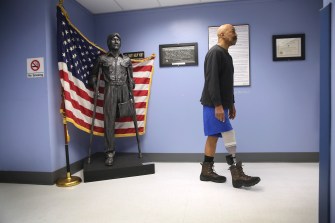 Salamanders, in particular, have been looked at for their ability to regrow lost limbs. A 2016 study described how salamanders can regrow “everything from bone to muscle to blood vessels with stems cells that form at the site of the injury.”

The study found that animals with remarkable regenerative abilities like zebrafish, bichir and salamanders shared the same 10 microRNA – small pieces of genetic code. The scientists think there is potential for reprogramming human microRNAs to act in the same way.

Other studies looked at macrophage cells in salamanders as being responsible for their restorative powers. 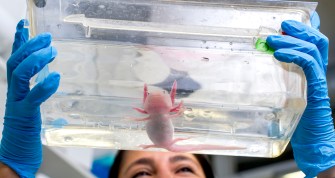 Mexican biologist Tatiana Sandoval-Guzman, a scientist who has lived in Dresden for six years, holds an axolotl in a glass tank in her laboratory at the Center for Regenerative Therapies in Dresden, eastern Germany, on November 17, 2015. (Photo credit: ROBERT MICHAEL/AFP/Getty Images)

Another researcher at the military symposium focused on a mouse for ideas on regeneration. Jason Brant from the University of Florida looked at the African spiny mouse’s ability to regrow a large amount of skin after being wounded by predators. The mouse can lose a lot of deep tissue and still regrow what it lost back without scars in a short period of time.

“Warfighters and civilians alike suffer large surface [cuts] and burns, and these result in medically and cosmetically problematic scars,” said Brant. “The impacts of these scars … are really staggering. The ability to develop effective therapies will have an enormous impact not only on the health care system but on the individuals as well.”

For more salamander action, check out this video piece from Wired:

Related
Health
New blood types are often discovered following medical disasters
New blood types are regularly discovered by an unusual absence or an unusual presence — both of which can result in tragedy.
The neuroscience of loving music
Humans are musical animals four million years in the making, explained by music expert Michael Spitzer.
▸
8 min
—
with
Michael Spitzer
Life
Scientists use CRISPR to insert an alligator gene into a catfish
Disease kills off 40% of farmed catfish. This gene protects them.
Neuropsych
How you breathe affects your brain
Your breathing rhythm influences a wide range of behaviors, cognition, and emotion.
Health
What happens when regular porn watchers abstain for a week?
Researchers watched for signs of withdrawal — but didn’t find any.
Up Next
Personal Growth
This Week In Comments: Aug 28th—September 3rd, 2017
Another week, another chance to stick our comment-boots on and wade out deep into the Big Think Facebook page to cherry pick our favorites for the week.