Now that Pope Benedict XVI has joined the Twitterverse, we will see how the pontiff wields the power of 140 characters. Early signs are only moderately encouraging.

Before he started tweeting this afternoon, the Pope communicated with his flock primarily through encyclicals and messages. Ironically, the message he conveyed in May registered some skepticism about the unholy influence of the Internet in general and social media in particular:

The process of communication nowadays is largely fueled by questions in search of answers. Search engines and social networks have become the starting point of communication for many people who are seeking advice, ideas, information and answers. In our time, the internet is becoming ever more a forum for questions and answers – indeed, people today are frequently bombarded with answers to questions they have never asked and to needs of which they were unaware. If we are to recognize and focus upon the truly important questions, then silence is a precious commodity that enables us to exercise proper discernment in the face of the surcharge of stimuli and data that we receive. Amid the complexity and diversity of the world of communications, however, many people find themselves confronted with the ultimate questions of human existence: Who am I? What can I know? What ought I to do? What may I hope? It is important to affirm those who ask these questions, and to open up the possibility of a profound dialogue, by means of words and interchange, but also through the call to silent reflection, something that is often more eloquent than a hasty answer and permits seekers to reach into the depths of their being and open themselves to the path towards knowledge that God has inscribed in human hearts.

Anyone who tweets will tell you that spending time on Twitter is not the ideal way to engage in “profound dialogue” with others. Tweets are great for sharing links or quick thoughts, but true dialogue should be conducted in person and at length. And nothing could thwart “silent reflection” more readily than tracking a Twitter news feed that is constantly spinning you in a new direction. If you are following too many people and thus have more incoming tweets than you could ever pay attention to, being on Twitter is an exercise in ignoring nearly all of your friends. Not a prescription for conversation, good will or the universal brotherhood of man.

Yet Pope Benedict was not wholly dismissive of the power of social media in his message. In fact, with important caveats, he extolled their capacity to help lost souls find meaning:

Attention should be paid to the various types of websites, applications and social networks which can help people today to find time for reflection and authentic questioning, as well as making space for silence and occasions for prayer, meditation or sharing of the word of God. In concise phrases, often no longer than a verse from the Bible, profound thoughts can be communicated, as long as those taking part in the conversation do not neglect to cultivate their own inner lives.

This, in a concise phrase, is what led Pope Benedict to become @Pontifex today.

How is he doing? After an avuncular welcome message, he offered brief answers to questions from members of his flock: 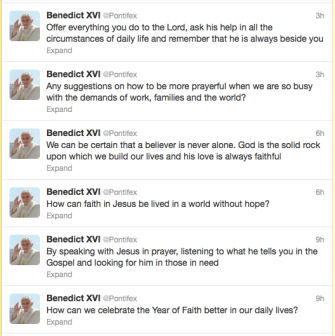 It’s like reading Augustine’s Confessions in bite-sized portions, without the theology, philosophical reflection or confessions of boyhood sexual sin. By all accounts, the ideas the pontiff is spreading on Twitter are simple, digestible, comprehensible. And they are meant to be accessible to Catholics worldwide: the tweets are going out in eight languages. We are light years from the requirement, only 50 years ago, that the Tridentine Mass be celebrated only in Latin.

We can be sure the Pope and the papal staff will be careful with his tweets. Though he committed the grammatical sin of neglecting to end some of his sentences with periods today, he will presumably be cautious with both the substance and form of the messages he conveys. So far, nothing could be construed as remotely controversial. But the assumption of papal infallibility that accompanies everything the Pope says in his capacity “as the supreme shepherd and teacher of all the faithful” when he comments on “some doctrine of faith or morals” may run up against the banality of his Twitter proclamations. When the Pope begins to sound more like a hoary Sunday school teacher than the leader of the worldwide Catholic church, his halo may lose a touch of its glow.

But who knows? It’s early in the game. The Pope may use Twitter to holy ends and enhance the image and reach of the Catholic Church. We’ll have to watch our news feeds to see where the pontiff leads us next.

Has ECON 101 turned Americans into Lemmings?

It’s hard to know what leads lemmings to race willfully to their own demise.  But I’ve come to believe that the suicidal tendencies embedded in American tax and fiscal policy […]