It was 50 years ago that this odd upcoming TV series first appeared in TV listings. 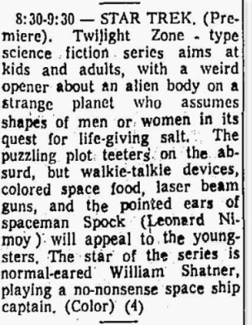 Without rehashing Star Trek’s well-known up-again-down-again history, Gene Roddenberry’s creation and its descendants have inarguably shaped what many of us expect, or at least hope, our future will look like. Not so much the constant inter-species battles, but definitely the part about how humankind is no longer at war with itself. Also, all those cool tech toys.

Alas, many of those toys remain in the realm of fiction, but this seems as good a time as any to run a systems diagnostic and see how 2016 reality compares with what we see on Star Trek.

The seminal event, according to Star Trek, that brought humankind together was Zefram Cochrane’s invention of the warp drive — an engine that can exceed the speed of light by multiple factors — in 2063, and the near-simultaneous revelation of the Vulcan species. That’s nearly 50 years away, though there are definitely days when the idea that we’ll all end up back in the woods like Cochrane seems plausible. We did make it though 1996, when Star Trek’s villain Khan initiated the fall of civilization. 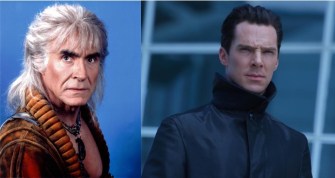 We can count ourselves head of Star Trek when it comes to women in the military. We don’t need to await a Captain Janeway. We may also be ahead of the Enterprise when it comes to sexual orientation.

Warp drive itself doesn’t seem to be on the horizon, though the mystifying capabilities of the “impossible” EM drive suggest how little we really know about propulsion. It’s an encouraging sign that things we assume aren’t possible may in fact be. While exceeding the speed of light still looks pretty impossible to most of us, NASA says it’s not.

Teleporting from place to place from transporter pads is still a big nope. Quantum physicists have borrowed the term when discussing quantum entanglement, though in quantum teleportation the only thing transferred from one place to another is information about an entangled particle’s state. This could be a start, though, depending on what we think teleportation is.

If it’s about moving information about a person from one place to another, quantum teleportation does move information from place to place. On the other hand, what you’d be doing is destroying the traveler at the point of departure and then reconstructing an exact copy at the destination. How murder-y.

Some feel that teleportation in Star Trek is the movement of a person’s matter from one place to another. No method has yet appeared for doing this.

Well, there’s no room-sized VR yet, but we do have the Oculus Rift products, and they are super-cool. They’re only visual and auditory, though, and the holodeck was totally immersive, down to touch, temperature, precipitation, smell, and so on.

Okay, this is a place where moving information from one place to another makes sense. Say you had a database of the exact properties that constitute a beverage, say “Earl Gray, hot.” Plus the properties of its cup. (We have some of these cups, btw.) Not mention a full-on Klingon brunch. 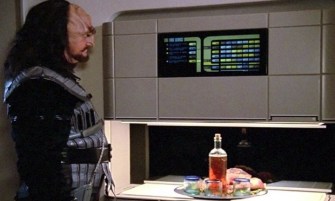 Maybe quantum teleportation can get there someday.

3D printing can build simple foods, but not from nothing, of course. Could it build a cup and what goes in it simultaneously? Maybe eventually.

I’ll just say Siri and Cortana, okay? And it’s rumored that Apple’s about to offer Majel Barrett’s voice as an option for Siri. She was Deanna Troi’s mom, Gene Roddenberry’s wife, and most importantly, the voice of the Enterprise’s computer.

We can’t yet point a device at someone to read their health — or scan a room with a device to detect lifeforms — but we do have devices that can take a person’s temperature from across the room, so that’s a start (They’ve been used in public places to scan passersby for Swine Flu and SARS.) It’s not hard to imagine other types of handheld readers for other types of signals that could be useful diagnostically. 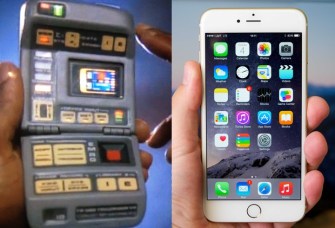 Needle-less injections? Sign us up for that. And MIT has made one!

We’ll Have to Keep At It

Of all of Star Trek’s inventions the one that most excites us is the one where we all stop fighting and embrace our common humanity. This may, unfortunately, require Klingons and Romulans.

They say that nobody understands quantum mechanics. But thanks to these three pioneers in quantum entanglement, perhaps we do.
Up Next
The Future