The six-ton satellite is set to improve television, broadband, and telecommunications services in Europe and Northwest Africa, and it was “almost the size of a city bus,” as Elon Musk tweeted, adding that it’s the largest geostationary satellite his company has ever flown.

SpaceX launched its first Falcon in 2010 as part of a test mission for NASA, and at the time the little rocket was unable to reach orbit. But over the past eight years, the rocket has grown more than 50 feet, added some 600,000 pounds, and doubled its carrying capacity. In 2015, Falcon 9 became the first orbital-class rocket in the world to successfully execute a controlled propulsive landing. It’s designed to be reusable, but no attempt was made to recover the boosters after Tuesday’s launch because of hazard weather conditions in the Atlantic Ocean. 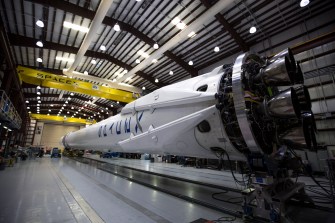 The model of Falcon 9 launched on March 6 was a Block 4. SpaceX hopes to settle on a final iteration of the rocket soon with its Block 5, which is expected to undergo test launching soon and could someday transport humans into space.

The milestone launch highlights how SpaceX has been ramping up its activity, successfully launching more rockets in the past two years than competitors like Arianespace and Boeing and Lockheed Martin’s United Launch Alliance. 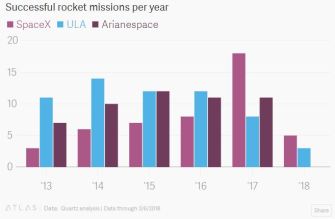 SpaceX has launched five rockets this year, the most notable being Falcon Heavy in February, and last year the company launched 18 rockets—more than double the amount in 2016.

You can watch a video of the launch below:

Related
The Present
Even in the age of AI, some problems are just too difficult for computers
Computers are growing more powerful and more capable, but everything has limits
The Future
How the metaverse will revolutionize K-12 and higher education
Imagine going on a tour through the human circulatory system as a tiny cell. That is just one example of education in the metaverse.
Starts With A Bang
Ask Ethan: What are white holes, and do they really exist?
In General Relativity, white holes are just as mathematically plausible as black holes. Black holes are real; what about white holes?
Life
Strange life forms create an “alien” ecosystem in an abandoned uranium mine
Slimy biofilms made up of bacterial and eukaryotic life forms have taken over an abandoned, flooded uranium mine in Germany.
Hard Science
Earth has an eerie “sodium glow,” and astronomers use it to image stars
Air currents in our atmosphere limit the resolving power of giant telescopes, but computers and artificial stars can sharpen the blur.
Up Next
Technology & Innovation
An 8-ton Chinese space lab will crash into Europe or the U.S. Don’t panic yet.
Experts can’t agree on exactly when or where, however.