We’ve talked about food waste before, but let’s do it again. Nearly 30% of the food produced globally is wasted. In the meantime, 6 million children under the age of five, die each year as a result of hunger. The problem is so serious that 2014 was designated by the European Parliament as the “European year against food waste.”

“The most important problem in the future will be to tackle increased demand for food, as it will outstrip supply. We can no longer afford to stand idly by while perfectly edible food is being wasted. This is an ethical but also an economic and social problem, with huge implications for the environment.”

Food is wasted throughout the entire food chain from production to households, but in the industrialized world over 40% occurs at retail and the consumer level. Food labels are particularly to blame, as they often make us throw out perfectly edible food just because the “best by” or “sell by” date has passed. As a matter of fact, label dates on food are “generally not regulated and do not indicate food safety,” and consumers often don’t know what different food expiry labels mean.

Solveiga Pakštaitė, a London based designer, wants to clear the confusion around food labels. She has a pending patent for a food label called Bump Mark that can accurately tell shoppers whether the food is good for consumption. 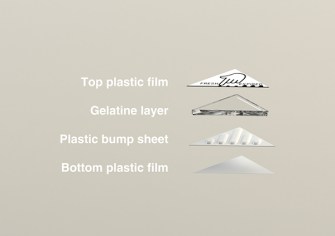 The label is comprised of a layer of gelatin set above a bumpy plastic sheet. Initially, the gelatin is solid and the bumps cannot be felt. When it starts to decay, however, it liquifies. Since gelatin is a protein and it decays at the same rate as protein-based foods, being able to feel the bumps means that the gelatin has liquified and the food has expired. In a sense, the label “copies” what the food in the packaging is doing and provides a real time “quality status” update, that is much more accurate than printed labels.

Solvegia is currently looking for a commercial partner to help her make the label a reality.

Non-Western thought is vast and ancient, so why don’t some consider it philosophy?
Up Next

A little bit of history was made on Nantucket on Sunday.   Julian Assange, the co-founder of Wikileaks, has been holed up in the Ecuadorian Embassy in London for over […]