Healthy sex is good for the body and our psychology, too. It boosts the immune system, lowers blood pressure, improves sleep, and eases stress and anxiety, giving us an overwhelming sense of well-being. In today’s hectic world, it can be hard to find a suitable partner. This is truer for millennials. A 2016 study, published in the journal Archives of Sexual Behavior,finds a surprising fact about the latest adult generation: they’re having less sex than the two previous ones, baby boomers and Gen Xers.

The reasons are manifold. Mostly, it’s that millennials are highly driven and focused on building their careers. They seek social recognition. Questions surrounding consent have also made the dating landscape more difficult to traverse. Lastly, widespread use of antidepressants may be decreasing millennial libidos. This generation dates in a different way, too. They are more likely to turn to a Tinder-like experience, for fear of getting tied into something that’s hard to get out of. They don’t want to “catch the feels.” But they forget that intimacy is a core human need.

Purveyors of sex robots say, they can help people have safe sex and remove the thorny issue of consent, while at the same time, lessening exploitation and sex trafficking, decreasing instances of predatory behavior, and perhaps even curbing the spread of STI’s. Could sexbots be the answer to all of this, and millennial dating woes, too? A new British study gives us a hard no. In fact, pervasive sex robot use will probably make things worse, they find. Rather than giving us a healthy outlet with no downside, sexbots might actually increase instances of malicious sexual behavior. 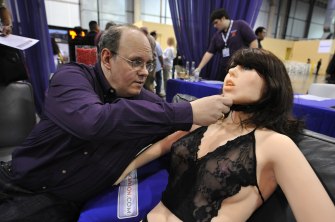 Consistently using a sexbot might make it difficult for some to carry on a romantic relationship with an actual human. Image credit: Getty Images.

Today, a sexbot is little more than an advanced real doll. Some can carry on simple conversations, but no one would mistake it for a real person. Experts say, they won’t remain this way for long. The Dickian days are coming, where A.I. and robotics are so advanced, it’ll be hard to tell who’s human and who isn’t.

A recent British study probed the health effects of widespread sexbot use. It was published in the journal, BMJ Sexual & Reproductive Health. Its outlook is rather dim. Instead of instituting harm limitation or merely becoming a healthy outlet, researchers find that pervasive sexbot use would likely increase what they called, “misogynistic objectification.”

This is the idea that women are sex objects and should be constantly available for the pleasures of men. Researchers say such an outlook could lead to the further victimization of women and children. Professor of women’s health Susan Bewley, of Kings College London, co-authored the study, along with Dr. Chantal Cox-George. 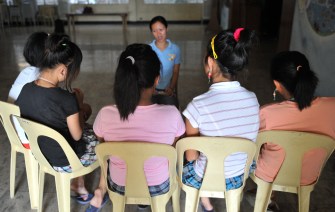 Support group for former Filipina sex workers. Rather than lessening trafficking and other sex crimes, widespread use of sexbots might increase them. Image credit: Getty Images.

A search of scholarly journal databases brought up all the studies surrounding the health effects of sexbots. They evaluated “the arguments for and against the sex robot industry,” and assessed, “the potential health implications that may affect both patients and clinicians.” The researchers also wrote, “While a human may genuinely desire a sexbot, reciprocation can only be artificially mimicked.” Instead of lessening loneliness, these robots might make us crave human contact more. Researchers do admit however that sexbots may have their place. They could aid those who are extremely lonely or who want to be cured of some type of sexual dysfunction.

Eventually, those who use sex robots could find it difficult to navigate a romantic relationship with an actual human being. Researchers found absolutely no evidence that interaction with a sexbot would make children safer or decrease sex trafficking. It might, instead, normalize such acts to the predator themselves and therefore make such heinous incidents more common. There’s no evidence pervasive sexbot use will decrease other sex crimes, either.

On top of all that, there’s no guarantee it’ll stop the spread of STIs, as there’s no evidence users will care for it properly or even keep a sexbot to themselves. “The overwhelming predominant market for sexbots will be unrelated to healthcare,” researchers conclude in their study. “Thus the ‘health’ arguments made for their benefits, as with so many advertised products, are rather specious.”

To see how far sexbots have come so far, click here:

Related
Neuropsych
Psychology studies that go viral are likelier to be bogus
A new 20-year analysis of over 14,000 psychology studies finds that a study’s media coverage is negatively linked to its replicability.
The Future
How a device transmits radio waves with almost no power
Apart from the energy needed to flip the switch, no other energy is needed to transmit the information.
The Present
Radical idea: Redraw the U.S. map as a nation of city-states
While cities drive national economic growth, their political geography means they cannot effectively deal with inequality, poverty, and other socioeconomic problems.
The Learning Curve
Why do high IQ people stagnate in their careers? Emotional intelligence
Research suggests that emotional intelligence is more vital for success than IQ.
The Present
Even in the age of AI, some problems are just too difficult for computers
Computers are growing more powerful and more capable, but everything has limits
Up Next
Starts With A Bang
Ask Ethan: If Mass Curves Spacetime, How Does It Un-Curve Again?
If spacetime is like a fabric, and mass bends it, what flattens it back out again?Matter tells space how to curve, and curved space tells matter how to move. That’s the […]