Google is famous for investing in technologies that do not have a clear commercial purpose, but a recent study into autonomous vehicles suggests that the company’s 20 self-driving cars may best serve as a fleet of taxis.

At least it would make good economic sense, according to the Lawrence Berkeley National Laboratory, and help the environment to boot. Google’s 20 autonomous cars have logged over 1 million miles collectively and each car currently drives about 10,000 miles each week each. With this robust testing, researchers are comfortable formulating plans on how to deploy self-driven cars — 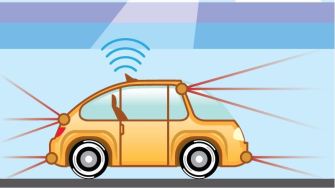 Because the technology is new, equipping a car with autonomous technology costs about $150,000 (the zero-emission fuel system comes standard). At this cost, an average driver who commutes about 12,000 miles per year would not recover that investment. But taxis, which drive between 40,000 and 70,000 miles per year, could.

The return on investment results from less fuel use and not having to pay a driver (not something all current taxi drivers would appreciate). Zero-emissions systems account for half the energy savings of a self-driving taxi fleet.

The other half comes from a practice called “right sizing” in which the appropriately sized vehicles arrives to pick you up. A single person will need a small autonomous car while a family leaving for vacation will require a larger, less fuel-efficient vehicle.

Princeton’s Alain Kornhauser predicts that, by 2030, self-driving vehicles could help economize road miles by carpooling. As for Google’s vehicles, they have yet to cause a single road accident. Watch this video to see how they’re programmed to adjust to challenges as they arise:

A Carrington-magnitude event would kill millions, and cause trillions of dollars in damage. Sadly, it isn’t even the worst-case scenario.
Up Next
Technology & Innovation

Sensory Percussions reinvigorates music by giving drummers the ability to control electronic samples, synths, and audio effects with the artistry they have developed by playing their own acoustic drum kits.