Something happened 3 billion years ago that changed the makeup of our prodigious universe forever. Two enormous black holes collided, resulting in an intense explosion and forming a solitary object 49 times as massive as our sun.

The explosion formed and released energy two times our sun’s mass within a fraction of a second. This sent out gravitation waves so powerful that they altered the fabric of space-time itself. A super-massive black hole arose in the aftermath. Scientists were recently able to detect this cataclysmic collision, and are learning more about black holes and the cosmos as a result.

The National Science Foundation’s cutting-edge gravitational wave observatory made these detections. The facility is called the twin Laser Interferometer Gravitational-Wave Observatory (LIGO). It’s run by an international group of scientists including some from NASA, MIT, and Caltech.

LIGO has two different locations, one in Hanford, Washington State and the other near Livingston, Louisiana. They’re purposely 1,800 miles (approx. 2,896 km) apart. The gravity waves were incredibly subtle. They altered space on and around Earth at just a fraction of the width of a proton. Yet, the instrumentation is so sensitive it can pick up such delicate occurrences. 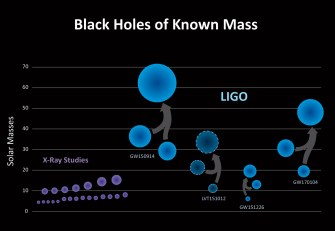 An interferometer is basically a laser-based measuring instrument that can detect gravitational waves and locate their origin. By carefully observing light and space with two gigantic interferometers, researchers can learn much more about gravity, one of the four main forces of the universe. LIGO scientists say, these dual observatories are on the same level of complexity as the large hadron collider (LHC) at CERN. LIGO is liable to make discoveries that’ll impact quantum mechanics, relativity, astronomy, and even nuclear physics.

This is the third time gravity waves have been detected using instruments on Earth and the first direct measurement. We now know more about stellar mass black holes, how they’re formed, the areas which they inhabit, and how two of them can end up in a spinning dance of death and merge. In this particular case, one was about 30 times as massive as the sun and the other 19 times as massive. The larger one drew the smaller in.

As they pulled closer they began swirling around one another, in a waltz lasting eons, sending out gravitational waves as they went, getting closer and closer until they united, which caused an explosion of astronomical proportions. Sounds darkly romantic. The findings were published in the journal Physical Review Letters. Researchers were even able to capture sounds associated with their final embrace.

So what is a black hole, exactly? A stellar mass black hole is the remains of a once mighty star. Astronomers believe that when a massive star runs out of nuclear fuel, it implodes. A smaller star, say the size of our sun, will eventually expand into a red giant and then collapse into a white dwarf.

With much larger stars, something different occurs. The outward pressure once pushing energy out into space is gone. As a result, the pulling pressure of gravity is no longer offset and so begins pulling everything inward with tremendous force. The gravitational waves resulting in the union of these two black holes was detected in September and December of 2015. Researchers have been studying them since then.

LIGO team member Laura Cadonati of Georgia Tech told National Geographic, “Before our discoveries, we didn’t even know for sure that these black holes existed.” Also previous to this, astronomers thought they couldn’t get any bigger than 10 solar masses. These newly discovered ones are far more massive.

One theory is that such black holes came from stars mostly made up of helium and hydrogen. These gases are stable and lose little mass over time. When the star expires, more mass is involved in the implosion, making the event much more powerful. 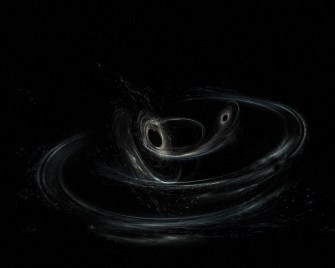 The LIGO team carefully studied the detected gravitational waves. From them, they could determine what direction each black hole was spinning in before the collision and the axis of each. From there, scientists theorized that these may have been sibling stars. Their remains dancing orbs of the blackest darkness, circling one another like predators, until the larger swallowed the smaller.

However, some data suggests they these stars were actually far apart, initially, and ultimately found themselves in each other’s orbit, with the larger drawing the smaller one in. Scientists hope these findings will give them a better understanding of stars, how they develop over time, and more about star clusters. They also hope to gain insights if they can, on the existence of dark matter.

Einstein predicted such gravitational waves a century ago while formulating relativity. But he thought the effect so minuscule, we would never be able to measure it. Now, not only can we, we’re be able to use the data collected to understand the universe in an entirely new way.

Most of our observations of the universe have been electro-magnetic to date. But with precise gravitational measurements and observations, we’ll be able to learn more about the universe through an entirely different lens.

Talking to yourself seems to yield real benefits, from boosts in cognitive performance to improved emotional regulation.
Up Next
Personal Growth

Are Friends More Likely to Make You Happy Than Family as You Age?