We’ve all seen sci-fi movies like Total Recall and Eternal Sunshine of the Spotless Mind, where a character has their memory erased. An even more frightening troupe, sometimes a character is imbued with a false memory. Though usually relegated to the world of the fantastical, real life scientists today believe they have a machine that can do such things, what’s known as a holographic brain modulator.

Researchers at UC Berkley have been developing it, the details of which were published recently in the journal, Nature Communications. There is definitely tons of room for misuse here, but the machine could also garner incredible benefits, such as helping patients regain lost memories, or even senses. It’s also likely to vault neuroscience research into the stratosphere.

The brain modulator monitors and then alters neural activity. It does this by isolating certain sets of neurons, at first dozens, then hundreds, and then thousands at a time, and stimulating them in particular patterns that mimic authentic brain activity. As a result, it is able to trick the brain into believing it had sensed, seen, or experienced an event or phenomenon which never occurred.

For those who have lost a sense or a limb, this could be a godsend. Consider an amputee who has an artificial arm. Such technology could restore the sense of touch. What about a blind person who gets a robotic eye? This breakthrough could help gather and interpret visual data for the brain, allowing the eye to work just like a real one. We usually think of holograms as 3D images floating in space, but it’s actually the bending of light into certain 3D shapes. Image credit: Getty Images.

Alan Mardinly is a doctoral student at UC Berkeley and one of three co-authors on the project. He said in a press release,

This has great potential for neural prostheses, since it has the precision needed for the brain to interpret the pattern of activation. If you can read and write the language of the brain, you can speak to it in its own language and it can interpret the message much better. This is one of the first steps in a long road to develop a technology that could be a virtual brain implant with additional senses or enhanced senses.

So far, it’s been tested on laboratory mice. With their heads immobilized, they were made to walk on treadmills. UC Berkeley scientists then used this technique to target specific neurons, stimulating the surface of a part of the brain called the somatosensory cortex. This is an area just a tenth of a millimeter thick. It’s the brain’s motor center, which controls things like vision and touch.

Scientists placed holographic obstacles in the mice’s way as they were walking. This took place inside their brains, like an illusion. Although the scientists noticed no change in behavior, monitoring showed that that each mouse’s brain responded as if the obstacle was real. Now, UC Berkeley scientists are developing ways in which to accurately detect behavior after a mouse has been stimulated with the device.

Computer generated holography was used to simulate the obstacles. Holography is the practice of bending and focusing light into 3D shapes. The process works by focusing attention on a 3D area of the brain, consisting of thousands of different neurons. From there, singular neurons are selected, each about the width of a human hair. The modulator activates 50 of them at a time using a 3D laser technique. First one jumble of 50 is activated, then another and another. It repeats this action up to 300 times per second.

The technique the machine uses to generate the hologram is called: three-dimensional scanless holographic optogenetics with temporal focusing (3D-SHOT). First, a liquid crystal screen is set up. This acts something like a photographic negative, but is instead a holographic one. Using the negative, scientists’ shape the light from 40W lasers into whatever 3D pattern they’ve chosen, inside the brain. Laser pulses are shot out every microsecond in bursts that last a mere femtosecond (one quadrillionth of a second), in order to maintain the hologram. 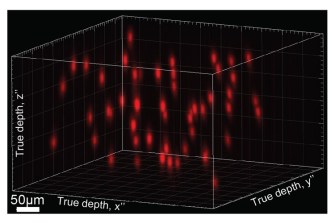 The biggest breakthrough was isolating certain individual neurons and causing them to fire without affecting their neighbors. The ability to target neurons precisely is a major advancement that will likely inspire other innovations. So far, researchers have only tested the technique on a small portion of the brain. Much more research must be done to prove it can stimulate other areas. What’s more, the machine is enormous in size.

UC Berkeley scientists however, believe that over time, they’ll be able to scale it down to the size of a knapsack. They’ll also record different patterns and cause a mouse’s brain to play them back, in order to see if each particular pattern always results in the same response. They believe that in time they’ll have the ability to control neural activity in the cortex, and so be able to recreate any perception or sensation one can think of.

Want to see video footage showing scientists using this technique in the somatosensory cortex of a mouse’s brain?  Click below. (Note that activated neurons glow fluoresce green, while the purple arrow indicates the laser light activating them).

Carl Jung was one such person.
Up Next
Technology & Innovation