Sometimes, it occurs when a person suffers a nearly fatal accident or life-threatening situation. In others, they are born with a developmental disorder, such as autism. But a slim margin of each group develop remarkable capabilities, such as being able to picture advanced mathematical figures in one’s head, have perfect recall, or to draw whole cityscapes from memory alone. This is known as savant syndrome. Of course, it’s exceedingly rare. But how does it work? And do we all hide spectacular capabilities deep within our brain?

In 2002, 31-year-old Jason Padgett, a community college dropout and self-described “goof,” was mugged outside of a karaoke bar. Two men knocked him down and kicked him in the back of the head repeatedly, leaving him unconscious. Padgett was checked out and sent home from the hospital that same night.

He’d suffered a serious concussion but didn’t know it, until the next morning when he noticed something peculiar. Upon entering the bathroom and turning on the faucet, he saw “lines emanating out perpendicularly from the flow.” He couldn’t believe it.

“At first, I was startled, and worried for myself, but it was so beautiful that I just stood in my slippers and stared.” It was like, “watching a slow-motion film.” He soon realized that he could see geometric shapes and fractals—irregular patterns that repeat themselves, in everything. “It’s just really beautiful,” he said.

Padgett began to find that he could intuitively understand the mathematical nature of everything around him. Before, he never rose beyond pre-Algebra. After the incident, he became infatuated with fractals and pi. His perception had completely changed. He soon grew obsessed with all the shapes he found in his house.

In his memoir, Struck by Genius: How a Brain Injury Made Me a Mathematical Marvel, Padgett writes, “I noticed the light bouncing off a car window in the form of an arc, and the concept came to life. It clicked for me-­because the circle I saw was subdivided by light rays, and I realized each ray was really a representation of pi.” 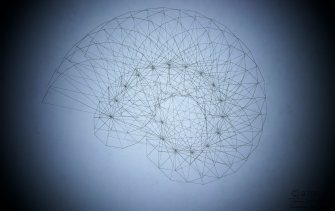 He soon locked himself away and began drawing precise and beautiful geometric figures for days and sometimes, weeks at a time. Padgett is one of the few people on earth who can draw fractals accurately, freehand. He became a germaphobe too and rather than seeing it as a gift, he started to wonder whether or not he was mentally ill.

He’d acquired an exceedingly rare condition. Only about 70 people in the world so far have been identified with savant syndrome. There are two ways for it to occur, either through an injury that causes brain damage or through a disorder, such as autism.

We’re familiar with the autistic savant, like the 1988 hit movie Rain Man, where the main character, played by Dustin Hoffman, can count a large number of toothpicks spilled onto the floor, instantaneously. It’s estimated that around 50% of those with savant syndrome are autistic.

The other 50% are either due to an injury to the central nervous system or a developmental disorder. Some researchers believe at least 10% of those with autism have some form of savant-like talent. Acquired savant syndrome is far rarer. 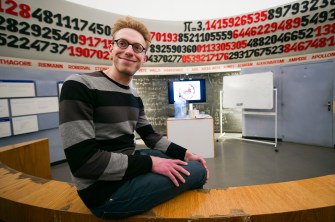 Things changed for Padgett after he saw a BBC documentary about Daniel Tammet. The British, autistic savant can recite pi to the 22,514th place, speaks 10 different languages—two he made up himself, and performs intricate mathematical calculations in his head, at lightning speed.

He’s also a synthete, meaning he experiences numbers not only visually, but as colors and geometric figures, as well. (Synesthesia is the blending of the senses, like certain letters having corresponding colors or letters-flavors. Or how certain people claim to smell music, in addition to hearing it. Synesthesia occurs in a variety of ways and differs widely from one person to the next).

Other famous savants include British-borne Stephen Wiltshire, who can draw panoramic cityscapes accurately, from memory, Dr. Anthony Cicoria, an orthopedic surgeon from New York, who, after being struck by lightning, can suddenly play the piano, and Alonzo Clemens who, after falling on his head as a child, can sculpt any animal from memory—down to the minutest detail.

Padgett soon contacted psychiatrist Dr. Darold Treffert, who’s been studying savant syndrome for over 50 years. “The most common ability to emerge is art, followed by music,” Treffert told The Guardian. “But I’ve had cases where brain damage makes people suddenly interested in dance, or in Pinball Wizard.”

In 2011, Padgett underwent an fMRI, along with transcranial magnetic stimulation (TMS). It was discovered the left side of his brain had become more active, while the right side far less so. Dr. Treffert contends that savant syndrome has to do with neuroplasticity—the brains remarkable ability to repair and rewire itself. Studies have shown that those who have acquired savant syndrome often sustained damage to the front area of their left temporal lobe.

“Following an injury to the brain, there’s recruitment of undamaged cortex from elsewhere in the brain, then there’s rewiring to that undamaged area, and a release of dormant potential. It’s a compensatory mechanism involving areas that may have been dormant, or areas that are ‘stolen’ and their function changed.”

Scientists began to wonder, what if they were to induce such conditions. Would it trigger a savant-like state in a subject? 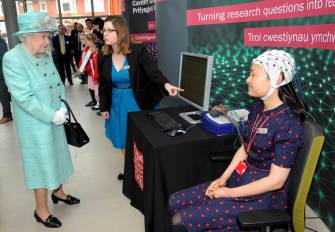 Scientists have developed a “thinking cap,” which can increase cognitive abilities. Getty Images.

Neuroscientist Allan Snyder at the University of Sydney, Australia, is doing exactly that, with what he calls the “thinking cap.” This is a rubber strap with two conductors. It’s fastened around the head and provides low levels of electricity to incapacitate a certain part of the brain. Tests on subjects have shown it induces savant-like skills including improved memory, better attention to detail, more creativity, better proofreading skills, and even better problem-solving. These capabilities fade about an hour after the cap is removed.

We are just now entering a golden age of neuroscience, according to neurobiologist Nicholas Spitzer at the University of California, San Diego. Initiatives to unearth the secrets of the human brain are ongoing at numerous institutions around the world. Prof. Spitzer predicts that in the coming decades, besides advancements in imaging technology, we’ll be able to send nanobots inside the brain that are so small, they’ll be able to enter and travel along neurons. Moreover, they’ll be able to communicate back their findings through Wi-Fi.

We’ll also be able to attach implants that can hook our brains up to computers and Wi-Fi, giving us instantaneous knowledge, and the ability to control devices with our minds. It may also be possible to identify and stimulate innate capabilities and in this way, awaken one’s latent savant. First, we’ll have to figure out if everyone has the ability to become a savant or not. And if so, what’s required on a neurological basis to get us there.

To learn more about the thinking cap, click here:

The book “The Genesis Machine” outlines the promise and peril of synthetic biology, a powerful tool that will allow us to program life like a computer.
Surprising Science

Pizza math: For the best price, you should always order the biggest pie

Pizzanomics isn’t an official field of research, but it can save you big money.
Up Next
Surprising Science

I mean, who wants to step into a minefield and start poking around?