Today’s guest is Salman Rushdie. He’s the author of twelve previous novels and four books of nonfiction, including Joseph Anton, Midnight’s Children (for which he won the Booker Prize and the Best of the Booker), Shame, The Satanic Verses, and Two Years Eight Months and Twenty-Eight Nights which we discussed two years ago on this show.  He is a member of the American Academy of Arts and Letters and a Distinguished Writer in Residence at New York University.

His kaleidoscopic, funny, philosophical new novel The Golden House has been called a “return to realism” but maybe only because the present-day American realities it draws upon and reimagines are so indistinguishable from fantasy.

In this episode, the first one with a repeat guest since the show was launched (Henry Rollins was one taping split into two episodes) Rushdie and Jason discuss New York City, the surrealism of everyday life, comic books, and much, much, more. 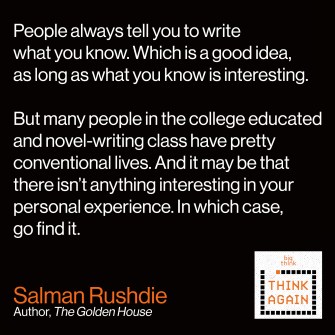 Richard Dawkins on religion and anti-science,

Ariel Levy on “having it all”

Pretty sure nobody has ever attempted this