It may be time to face the reality that some of our favorite dystopian tropes are becoming reality. Skynet has not yet taken over, but automatic war machines are here and about to get busy fighting. Ukrainian officials indicate they are planning to use armed ground robots in their conflict against Russian-backed forces next year.

On October 9th, Ukrainian military and defense leaders demonstrated the robot that could see action first, the experimental Phantom, at the Association of the U.S. Army’s annual meeting in Washington, D.C. It can have treads like a tank or six wheels and be armed with anti-tank weapons, grenade launchers or machine guns, reports Patrick Tucker for Defense One.

While armed unmanned aerial vehicles, drones, have been used for some time, fighting with armed ground robots has not been a common feature of warfare.

The Phantom, developed by the Ukrainian defense contractor Ukroboronprom, can hit speeds of up to 37 mph and can go 81 miles on one engine charge. It even has a backup microwave-communication link which will work even if connection with its operator is hacked or jammed – a problem Ukrainian troops already encountered in their fight against Russian-backed troops.

The Phantom can also be useful in evacuating wounded soldiers from the field.

“What’s interesting about the Ukrainian conflict is that it’s the Ukrainian side that is developing unmanned systems it thinks will help it fight. Phantom is one such machine,” said Samuel Bendett, a research analyst with the Center for Naval Analyses’ International Affairs Group.

Here’s the Phantom in action:

Russia has its own robots, like Uran-6, which have been removing mines and unexploded bombs in Syria. Uran-9, on the other hand, has been developed for combat and can see action in Syria. It weighs in at 10 tons and is armed with a 30 mm cannon, a 7.62mm machine gun, and and anti-tank rockets. 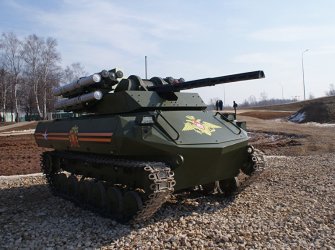 According to Sputnik, the Syrian Arab Army has used ten Russian combat robots in battle, leading to 70 rebel casualties.

And who can forget Fedor, the gun-toting robot:

Not to be outdone, the U.S. is also working on its own robotic fighters like the MAARS (Modular Advanced Armed Robotic System) robot, now in testing by the marines. It can be outfitted with an M240 machine gun that can be used to zone in on targets. 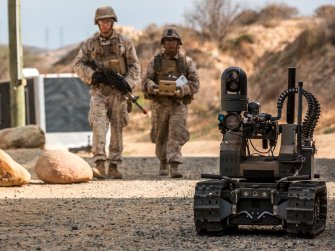 MAARS can also be reconfigured to sport a 40mm grenade launcher. Its top speed is 7mph. The machine is not fully autonomous, requiring an operator to reload it by hand. Fully autonomous robots are also in development.

Is science destined to crack the code of consciousness—and how would we even go about it?
▸
8 min
—
with
Max Tegmark
Up Next
Starts With A Bang

Ask Ethan: How Many Planets Did NASA’s Kepler Miss?

Illustration of the planet-finding space telescope, Kepler, from NASA. Image credit: NASA / Kepler.It’s discovered thousands. But how many more are out there?“How vast those Orbs must be, and how inconsiderable this […]