A set of robotic arms has expertly prepared a professional chef’s crab bisque recipe at a recent industrial fair in Hanover, Germany, opening the door to having professionally prepared food for each meal at home.

By equipping chefs with sensor-fitted gloves, robots can easily learn the specific ways that master cooks prepare meals, mimicking their hand and arm movements at all moments during the cooking process. All it takes is setting out the ingredients in prearranged locations.

The technology is being developed by Mark Oleynik, a Russian-born scientist and engineer now based in London, with assistance from teams at Stanford University, and the Sant’Anna School of Advanced Studies, in Pisa, Italy. Oleynik’s company, Moley Robotics, aims to sell the first commercial model by 2017 for a price of $15,000. 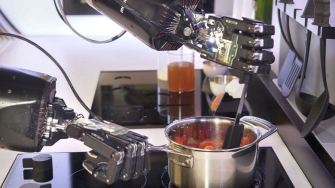 “Oleynik’s plan is to support his automated kitchen with an online library of more than 2,000 recipes. And, because it is copying the idiosyncrasies of particular people, the service he plans will let a user select not only a dish, but also its creator — in effect, bringing a virtual version of a celebrity chef into the user’s house to cook it for him.” 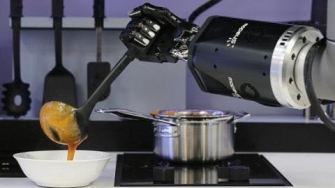 At Big Think, we’ve spoken before of robots taking the jobs of humans, whether it’s bus drivers, lawyers, or journalists (gulp). There are several serious questions that face economists and public policy developers going forward. One is whether robotics will create enough jobs to sustain our current rate of employment. That seems doubtful since the main industry they open up is robot repair services (but how long before that is automated as well?).

Second, do androids dream of stealing our jobs?

A third question, and a very ironic one indeed, is whether the economy can sustain a future of free abundance, created by machines for a public that can satiate itself endlessly on goods that have an extremely low marginal cost. But of course, if many, many people lose their jobs to robots, how are we going to pay for things? Does paying for things even make sense anymore? Americans currently specializing in what Andrew McAfee, associate director of the Center for Digital Business at the MIT Sloan School of Management, calls “routine knowledge work” may find themselves out of work sooner than they think.

Read more at The Economist.

Even without the greatest individual scientist of all, every one of his great scientific advances would still have occurred. Eventually.
Up Next
Floating University

WATCH: How We Speak Reveals What We Think, with Steven Pinker