There’s estimated to be millions of gigawatts of clean energy lost every second on Earth. About 80% of the solar radiation that hits our planet is absorbed by the atmosphere, the oceans, and the planet’s surface. What’s left over is infrared (IR) radiation. This clean and abundant energy source remains untapped, for now. Known as heat waste, scientists have been scratching their heads, trying to figure out how to recoup this energy for human purposes.

Unfortunately, the waves are tiny and only last for a quadrillionth of a second. As such, no one has been able to build an antenna small enough to gather it. Besides the difficulty of fabricating or testing an antenna at the nanoscale, infrared waves oscillate thousands of times faster than the speed at which a semiconductor can move electrons through a junction. In other words, the waves move too fast to allow us to collect electricity from them.

So a group of physicists decided to try a different tactic, using quantum tunneling. And recently they announced a breakthrough. The scientists, who hail from the King Abdullah University of Science and Technology (KAUST), in Saudi Arabia, created a way to collect this energy and turn it into electricity. Their results were published in the journal Materials Today Energy. 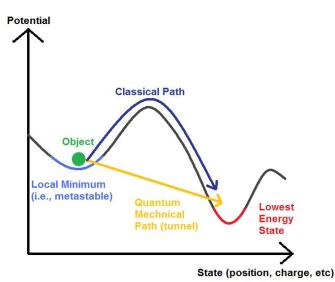 Instead of dealing with it as it is, researchers at KAUST decided to treat IR radiation as electromagnetic waves. Lead researcher Atif Shamim said that “There is no commercial diode in the world that can operate at such high frequency.” To make this breakthrough, they turned to quantum tunneling. This is a weird phenomenon in quantum mechanics where a particle can move through a solid barrier, one that it doesn’t have the energy to surmount.

Say a ball comes at a wall. This ball is a particle and the wall, a barrier it meets. The ball doesn’t have enough energy to climb over the wall. So inexplicably it somehow tunnels through it, by disappearing and suddenly reappearing on the other side. Tunneling requires less energy than climbing over and is possible due to what’s known as superposition.

Since any particle’s position and form isn’t completely fixed, until measured, this ambiguous state allows particles to do some pretty weird and surprising things that can’t be explained by classical physics. Though quantum tunneling is beginning to be used in technology, such as with quantum computing, physicists still don’t understand exactly how or why it happens. 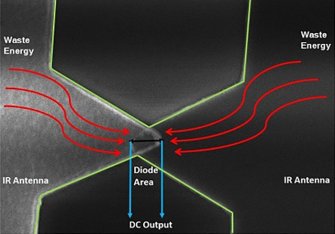 So what KAUST researchers did was, instead of using a semiconductor to move electrons through, they took advantage of quantum tunneling. Shamim and colleagues fashioned a bowtie-shaped nano-antenna attached to a metal-insulator-metal (MIM) diode. Infrared waves are pulled in by the antenna, then pass through an incredibly thin barrier, which allows electrons to be collected in a matter of femtoseconds (quadrillionths of a second).

The nanoscale antenna is two overlapping metal arms with a thin film of gold and titanium in the middle, allowing for the generation of an electrical field that invites tunneling. The material used doesn’t get hot or cold, so it doesn’t need to be cooled or heated.

This technology is scalable since its design is based on physical rather than chemical properties. Postdoctoral researcher Gaurav Jayaswal, who worked on the project, said in a press release, “The most challenging part was the nanoscale overlap of the two antenna arms, which required very precise alignment. Nonetheless, by combining clever tricks with the advanced tools at KAUST’s nanofabrication facility we accomplished this step.”

Researchers say this could be a real “game changer” for renewable energy. While photovoltaic solar panels can only collect energy during the day, when the sun is shining, infrared heat can be collected 24-7, in any weather. This method could be used to recoup energy from waste heat generated during industrial processes as well.

In the future, millions of these devices may be set up to collect energy. Even so, many technical challenges still lie ahead. According to Dr. Shamim, this was only a proof-of-concept study, the beginning of a long journey toward a new form of pure, clean, zero waste energy.

Will solar one day overtake all other forms of energy? See what Michio Kaku thinks here.

Related
The Learning Curve
Why do high IQ people stagnate in their careers? Emotional intelligence
Research suggests that emotional intelligence is more vital for success than IQ.
The Present
Even in the age of AI, some problems are just too difficult for computers
Computers are growing more powerful and more capable, but everything has limits
The Future
How the metaverse will revolutionize K-12 and higher education
Imagine going on a tour through the human circulatory system as a tiny cell. That is just one example of education in the metaverse.
Starts With A Bang
Ask Ethan: What are white holes, and do they really exist?
In General Relativity, white holes are just as mathematically plausible as black holes. Black holes are real; what about white holes?
Life
Strange life forms create an “alien” ecosystem in an abandoned uranium mine
Slimy biofilms made up of bacterial and eukaryotic life forms have taken over an abandoned, flooded uranium mine in Germany.
Up Next
Politics & Current Affairs
Just 3% of Americans own more than half the country’s guns
Studies indicate that most guns are owned by a small amount of Americans, while the majority’s views on gun control issues are ignored by lawmakers.