A new slate of bicycle models — including lightweight and electric bikes designed for hill travel — could soon appear in your local bikeshare system.

PBSC Urban Solutions, the company that supplies bikes and stations for New York’s CitiBike and DC’s Capital Bikeshare (among others), made a splash last week at the Velo-City world cycling conference in Taipei, where it introduced its new family of next-generation bicycles. 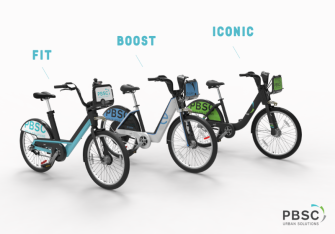 Along with its familiar ICONIC model, the stout bikes already in use in over a dozen cities around the world, PBSC unveiled a smaller, lighter alternative called the FIT, as well as a new electric model — the BOOST. The move to expand the fleet came after discussions with smaller cities and cities with hills that requested more options for riders.

The FIT is billed as a lighter version of the ICONIC model, offering better maneuverability than its older, larger companion. One of the main criticisms of bikeshare systems is that the bikes themselves tend to be bulky, part of the reason why they’re also so resilient. The downside is that it’s difficult to pedal uphill with 45 lbs. of metal — resilient or not — dragging you down. The lightweight FIT should definitely make things easier for riders in hilly locales.

The new BOOST model is perhaps even more intriguing. According to a PBSC release, the company’s new pedal assist electric model features a battery that charges as the bike sits locked into its station. It sports a hub motor integrated into the wheel that provides a noiseless extra push up hills, against wind, and over long distances. For riders of Bay Area BikeShare, that news has to be music to their ears.

In Bill Nye’s city of the future, bicycles would be a primary form of transportation.

Rollout dates will depend on the sort of demand PBSC gets for the new models, though cities that choose to expand will find that the new bikes already work with existing technology. The FIT bikes could be rolled out as soon as the fall, with the BOOSTs arriving a little later.

PBSC Urban Solutions has supplied over 45,000 bikes and 3,500 stations to bikeshare systems worldwide, including 15 in North America, plus London and Melbourne. The company is based in Montréal.

A forensics expert explains what’s involved with documenting human rights violations during conflicts, from Afghanistan to Ukraine.
Up Next
Culture & Religion

Immaculate Construction: The Abandoned Church That Became a Skatepark