Cancer is one of the topmost killers worldwide. The complexity and wide variety of types makes it hard to find one useful therapy to neutralize it, without harming healthy tissue. Now, researchers at The Scripps Research Institute in Florida think they’ve developed one. Their report was published in The Proceedings of the National Academy ofSciences (PNAS). It all surrounds immunotherapy.

Immunotherapy is where the immune system is altered in order to enhance its ability to fight certain diseases, usually cancer. Other names for it are biologic therapy or biotherapy. Today there are two main methods. One is creating proteins that give the immune system a boost, and the other is “training” immune cells to better recognize and take out cancer cells. 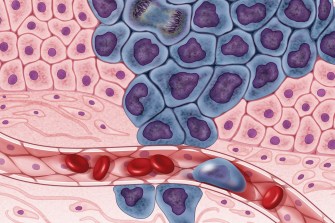 Immunotherapy is useful since it can work where other treatments fail. It can be used alongside other therapies and may cause fewer side effects than other treatments. Once the system is cancer free, those immune cells remember the malignancy they’re programmed to go after and will eliminate any that pop up, meaning a lower chance of cancer recurrence.

There are side effects. One is flu-like symptoms. These often occur in the beginning and fade over time. It can also cause itching or swelling in certain parts of the body. Immunotherapy is a slow moving strategy and doesn’t work for everyone. Even so, medical researchers believe it’s one of the most promising cancer therapies to be developed within the last decade or so. New iterations are coming out all the time, too. In this study, researchers developed a remarkable technique to help the immune system target and neutralize cancer cells.

The immune system is made up of white blood cells, and the organs and tissues of the lymph system, such as the bone marrow. Basically, it defends the body through antibodies and killer T cells. Antibodies roam the bloodstream looking for foreign invaders. When they find them, they bind to them and call to killer T cells, who eliminate the potential threat. This new treatment takes advantage of bi-specific antibodies. These are the kind that can bind to two different potential threats at the same time. 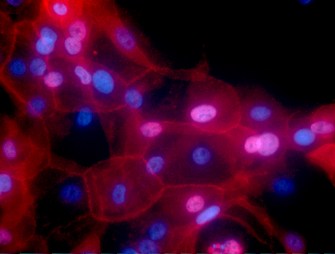 Breast cancer cells. This type of immunotherapy may be able to take out a variety of different cancers, including treatment-resistant breast cancer. Image credit: National Cancer Institute, NIH.

So what’s the innovation here? This method allows antibodies to recognize a specific protein which occurs on several different types of cancer cells’ outer layer. While this protein is expressed in healthy cells during the development of an embryo, it’s wholly absent from tissues once the person is outside of the womb. The protein is called receptor tyrosine kinase ROR1. Researchers developed what they call a “T cell engaging bi-specific antibody,” which binds to the protein. The antibody grabs the cancer cell, then calls over killer T cells to take it out.

Christoph Rader was the senior author on this study. He explained to Medical News Today, “Once the T cells are recruited and activated, they release cytotoxic molecules that penetrate the target cells and kill them. Natural antibodies can’t do this. You have to engineer them in a bi-specific fashion to do this.” Another advantage is, the technique is versatile.

“One of the most unique aspects of this bi-specific antibody is that it can work in so many different cancer indications,” Prof. Rader said. This includes breast, ovarian, lung, and blood cancers. Rader and colleagues believe it could be very effective for types of cancers that are hard to treat. Furthermore, it stays in the body for days. The only bi-specific antibody currently approved by the FDA lasts for hours. Far more testing will be required before it makes its way into clinical use. However, the initial results are encouraging.

To learn more about immunotherapy to fight cancer, click here:

Related
13.8
Could a hidden variable explain the weirdness of quantum physics?
We have searched and searched but have never found one.
The Past
The Wild West was lawless and chaotic — and the police helped keep it that way
Lawmen and outlaws were often the same people.
Thinking
6 great philosophers and how they used their political power
Most philosophers merely contemplate the world, but what about the ones who actually tried to change it?
Neuropsych
Asthma drug brings back “lost” memories
In a study involving mice, scientists used two different techniques — one optogenetic and one pharmacologic — to recover “lost” memories.
Hard Science
3 new studies indicate a conflict at the heart of cosmology
The Universe isn’t as “clumpy” as we think it should be.
Up Next
Technology & Innovation
Ryan Gosling’s Neil Armstrong biopic ‘First Man’ trailer looks awesome
Plus: how accurate was the backlash to the Apollo missions, as depicted in the film?