A new book by two industry titans predicts that in the near future everyone will have a digital “alter ego”.

The book “The Future Computed” comes from Microsoft’s President Brad Smith and the EVP of AI and Research Harry Shum. In this freely-available (and worth checking out) look into what’s just around the bend, the two argue that companies have to embrace AI if they want to be successful going forward. But progress can move faster if researchers do not sit on the knowledge they are developing but share it with competitors, ensuring that AI will reach its full potential.

One big AI advancement that the two tech gurus predict will be created within the next 20 years is the advent of digital assistants. We are not talking the current versions of Apple’s Siri, Microsoft’s Cortana or Amazon’s Alexa, but assistants that control all aspects of your life, knowing everything about you (with your permission). Internally, Microsoft uses the words “alter ego” or “a second self” to describe the kind of amazingly sophisticated digital help you’ll be getting. 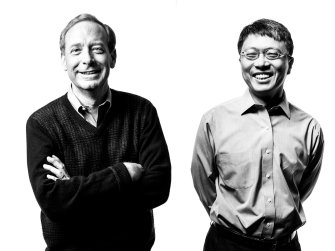 Another interesting point the tech giants make involves the importance of humanities. The authors propose that once AI is close to being given decision-making responsibilities, researchers with backgrounds in humanities will be needed to guide the AI to become more human-like in its thinking. Tech companies can help create the tools, but how the society uses them should be part of a much broader conversation. Smith and Shum also highlight the significance of starting to discuss and coming to a consensus on the ethics of AI.

What are some of the abilities that your future digital “alter ego” might have? While Microsoft hasn’t necessarily shared many details of such plans, other industry insiders have some ideas. For one, our communication with such an assistant will likely be conversational, but instead of talking to one out loud, the interaction might take place entirely in your head.

Elon Musk is betting on that kind of future as well, founding Neuralink to create a brain-computer interface.

Another advance to look forward to – the AI second self will likely make you much smarter. It will be able to not only keep track of where you need to go, who you need to see, what pill you need to take, or order things for you based just on what you are thinking, but it will be an inexhaustible supply of immediately available information, calculations and well-informed decisions for you to make.

An AI layer will be “amplifying human ingenuity in untold ways”, write Smith and Shum.

If we don’t get enslaved or somehow destroyed by AI, as Elon Musk and other experts also often caution, a future with a digital second self is certainly worth looking forward to.

Was Nietzsche a Republican, Democrat, or the Antichrist?

Nietzsche has had a large influence on political history, but what did he really think of all the ideologies he examined?