The developed world takes the Internet for granted. It seems everyone has it. But billions of people worldwide can’t afford to get online, limiting access to essential medical services, not to mention fun and entertainment.But Jana CEO Nathan Eagle thinks the Internet should be free (without colonial overtones, ahem, Facebook) and he’s found a way to do it.

Over 40 percent of smartphone owners in India don’t have enough money to get a data plan. Handset prices have come down dramatically to $40, but people end up using these Android phones as dumbphones, Eagle told me in an interview.

Eagle is the CEO of Jana, and his company’s product is the mCent app. It addresses two issues facing emerging markets: it givesusers the ability to access the internet for free and it helps connect major corporations with its next billion potential customers. One issue helps serve another, creating an almost symbiotic relationship.

“We have thousands of clients that want to engage with the next billion consumers,” Eagle said. “Instead of spending the money on billboards, radio, TV, or even Facebook ads, they’re now redirecting their advertising budgets to mCent to be able to start cultivating relationships with these users, and in so doing, they’re empowering these users by providing them with free internet.”

The mCent app is a marketplace within an marketplace. It’s available in developing markets in Asia, Latin America, and Africa. Users in these countries can download the app from their phone and start to earn data by trying out sponsored apps. For every megabyte spent within the sponsored Amazon app, for example, Jana will credit the user with an additional megabyte that they can use for anything. It’s an ad-sponsored internet. 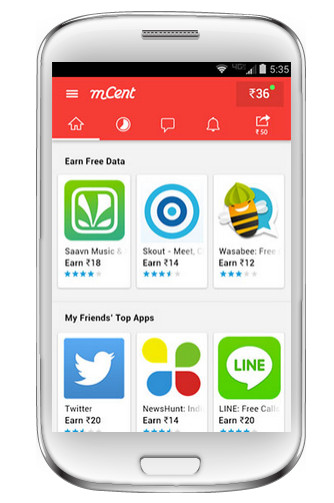 The origins of this sponsored model came from some work Eagle did while he was in Kenya.

On the surface, the project appeared to be a success until it entered its second week after launch.

“About half the nurses stopped texting in the data. By the end of the first month virtually no nurse was using our platform anymore.”

Eagle attributes its failure to a lack of insight into something most people in America take for granted. “By asking them to send an SMS every day, we’re essentially asking them to take a paycut—something that fundamentally wasn’t fair.”

So, Eagle switched tactics and created a system that would not only allow these nurses to send these critical SMSes for free in order to maintain this map of information, but would also credit these nurses with an additional penny as an incentive.

This model would eventually become the foundation for Jana’s mCent app. In countries, like India and Indonesia, where every byte costs, the mCent app gives people the means to access the internet where there once was none. The app largely side-steps the net neutrality debate that got Facebook in trouble when offering a selective view of the internet for free.

Jana’s success has been predicated on its ability to offer something no one else has: unrestricted, free internet access. “That’s the service we provide,” Eagle said. But it’s not wholly free, the service does take advantage of situation.

“Is there no alternative to sponsored data?” asked Nadine Freischlad, a reporter for Tech in Asia. “It’s almost cynical: the most vulnerable people – low income communities just making their first steps on the internet – become easy targets of marketing messages and data mining.”

“I think a lot of people get into this religious fervor about net neutrality and we feel strongly, as well, that the internet is a basic human right and unrestricted internet access should be something that we should be striving to provide to every member of the human species,” Eagle told me. “With that said, I don’t think this is a space that’s going to get solved just by regulation. I think users in the market, like India, are speaking for themselves—we have over 10 times as many active users in India as Free Basics does.”

It’s here we have to ask ourselves: is an ad-supported internet better than no internet? Eagle believes so. “The benefit far outweighs the downside of exposing people to global brands,” he said in an interview with Forbes.

Related
Thinking
Finding your essential self: the ancient philosophy of Zhuangzi explained
Adopting a healthy scepticism towards inherited ideas means “emptying the container of the Self.”
The Future
Startup’s bladeless flying car is designed to reach Mach 0.8
One of Jetoptera’s VTOLs is expected to reach speeds of around 614 mph, about as fast as a commercial jet airliner.
Health
New blood types are often discovered following medical disasters
New blood types are regularly discovered by an unusual absence or an unusual presence — both of which can result in tragedy.
The neuroscience of loving music
Humans are musical animals four million years in the making, explained by music expert Michael Spitzer.
▸
8 min
—
with
Michael Spitzer
Life
Scientists use CRISPR to insert an alligator gene into a catfish
Disease kills off 40% of farmed catfish. This gene protects them.
Up Next
Technology & Innovation
Lightweight and Electric Bikes Could Be Coming to Your Local Bikeshare System
New bikes could be on their way to your local bikeshare system. PBSC Urban Solutions, the largest supplier of bicycles and stations in North America, has unleashed a pair of brand-new models designed to give riders a broader choice of how they use the system.