Astrophysicists from the University of Toronto used the natural patterns of Saturn’s moons and rings to compose two pieces of music.

They did it to celebrate the upcoming end of the Cassini probe, which after twenty years will be decommissioned next month by being crashed into Saturn while gathering more data.

The team included astrophysicist Matt Russo, who along with fellow postdoctoral researcher Dan Tamayo, created the music and played the million-kilometer-long intergalactic instrument. They were joined in the project by the musician Andrew Santaguida.

To accomplish the feat, the scientists relied on the data of orbital resonances from Saturn’s moons and the trillions of particles floating in its ring system, as gathered by Cassini. Orbital resonances reflect the gravitational influences exerted by celestial bodies when they move past each other. The repeating patterns can be transformed into musical harmonies.

“Wherever there is resonance there is music, and no other place in the solar system is more packed with resonances than Saturn,” said Russo.

His partner Tamayo explained the grandiosity of their giant space instrument:

“Saturn’s magnificent rings act like a sounding board that launches waves at locations that harmonize with the planet’s many moons, and some pairs of moons are themselves locked in resonances,” said Tamayo. 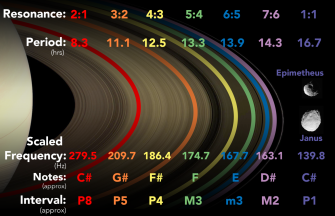 For the first piece, which follows Cassini’s demise as it plunges towards Saturn, the researchers generated musical notes by increasing (by 27 octaves) the orbital frequencies of Saturn’s six large inner moons. What we essentially hear in the piece are the real frequencies of the moons but “shifted into the human hearing range” as says Russo. Every time a moon would complete an orbit, a computer simulation of the moon system would play corresponding notes.

A moon system would have two orbital resonances which essentially provide a structure to what would be a droney, lullaby-like melody otherwise. The moons Mimas and Tethys, for example, are locked in a 2:1 resonance, meaning that Mimas orbits two times for every one orbit of Tethys. Moons Enceladus and Dione have the same relationship. As the rhythms are combined, the resulting musical patterns fall in and out of synchronicity in fascinating ways.

“Since doubling the frequency of a note produces the same note an octave higher, the four inner moons produce only two different notes close to a perfect fifth apart,” explained Russo, himself a trained musician. “The fifth moon Rhea completes a major chord that is disturbed by the ominous entrance of Saturn’s largest moon, Titan.”

The music happens as increasing orbital frequencies of the rings are turned into a rising pitch, while the volume goes up and down in correspondence to the brightness and darkness of the band of the rings. The very ending – the death of Cassini – is inspired by a major chord in the song “A day in the Life” by The Beatles, according to the musically-inclined scientists.

Check out the piece here:

The second piece, also honoring the last few months of Cassini’s mission, shows off the scales as performed by the moons Janus and Epimethus – two small moons that orbit outside Saturn’s main ring system. They are locked in a 1:1 resonance – the only such pair in the solar system. They basically swap places every four years. The music reflects their relationship by a unison drone with a constantly shifting but repeating rhythm. Russo played a C# note on the guitar for every orbit. A cello plays the note for each resonance in the rings.

“Each ring is like a circular string, being continuously bowed by Janus and Epimetheus as they chase each other around their shared orbit,” ” said Russo. “Saturn’s dancing moons now have a soundtrack.“

Check out that piece here:

The group also recently completed a similar musical mission with respect to the Trappist-1 planetary system.

Carl Jung was one such person.
Up Next
Strange Maps

A Map of the Universe, According to René Descartes

Cartesian vortices are *so* 17-th century.