If the sheer number of Earth-like planets wasn’t enough to convince you there’s life elsewhere in the universe, this might. Scientists studying the oldest ever discovered fossils, found that microbes actually lived very early on in our planet’s history, when it wasn’t what we traditionally consider hospitable to life. The results of this study were published in the Proceedings of the National Academy of Sciences (PNAS).

11 complex microorganisms were discovered frozen in time in a piece of rock unearthed in Western Australia. These fossils are 3.465 billion years old. Scientists believe that life began somewhere around 3.8 billion years ago. That’s pretty soon after the Earth was formed, relatively speaking. That occurred 4.5 billion years back. One radical study finds that life on Earth may have appeared even earlier.

This latest one was the most detailed analysis of microfossils ever. Prof. J. William Schopf, a paleobiologist at UCLA, led the study. He and colleagues found out what kind of microbes they were they were alive. The scientists accomplished this through a state-of-the-art technique known as secondary ion mass spectroscopy (SIMS). If life is ever brought back from Mars, this is what scientists would use to detect it, Prof. Schopf said. 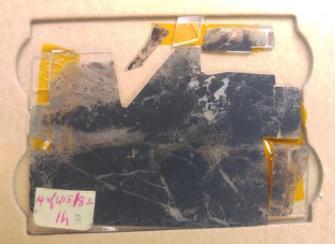 This rock sample, taken in 1982, comes from one of the oldest and best preserved rock formations in the world, Apex Chert in Western Australia. Credit: John Valley/UW-Madison.

What SIMS does is separate carbon isotopes and determine their ratios. This allows scientists to see what type of microbe a microfossil is. “The difference in carbon isotope ratios correlate with their shapes,” said study co-author John Valley, geoscience professor at Wisconsin University. The ratio of carbon-12 to carbon-13 for instance, tells what type of metabolic function a microorganism had. Those bacteria who photosynthesize have a different carbon signature than those who say, consume methane. What researchers found was diversity and specification among the microbial life present very early on in our planet’s history.

“The rocks we studied are about as far back as rocks go.” Schopf said. “By 3.465 billion years ago, life was already diverse on Earth; that’s clear — primitive photosynthesizers, methane producers, methane users. These are the first data that show the very diverse organisms at that time in Earth’s history, and our previous research has shown that there were sulfur users 3.4 billion years ago as well.”

Two of the species discovered utilized a simple form of photosynthesis, a third and fourth consumed methane, and a fifth produced the greenhouse gas. This is the first detailed analysis of microfossils to date. Schopf helped pioneer the SIMS technique over the course of his career. In 1993 he illustrated the device’s ability to describe fossilized microbial life and in 2002 proved it.

Then in 2015, he and a team using SIMS to identify a deep sea microorganism that hadn’t evolved in over 2 billion years, making it the longest case of life-absent evolution, ever discovered. There are only a few SIMS devices in the world. Another happens to be in Prof. Valley’s lab, where Schopf’s team’s findings were verified. 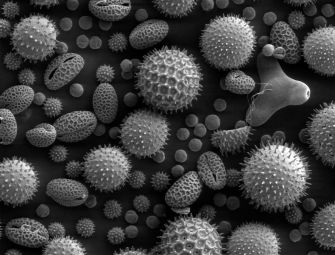 What makes this discovery even more impressive is that these microbes existed at a time when very little oxygen was in the Earth’s atmosphere. This gas that we use for respiration didn’t appear on the planet for another half a billion years, according to Schopf. It was plentiful only about 2 billion years ago. But Schopf says that was a good thing, as far as these microorganisms were concerned. Oxygen would have killed them.

The Earth at this time would’ve been a good environment for these primitive photosynthesizers. Today, their ilk are rare, only surviving in environments which have light but very little to no oxygen. More fascinating still, Schopf said this study, “tells us life had to have begun substantially earlier and it confirms that it was not difficult for primitive life to form and to evolve into more advanced microorganisms.” He added, “If the conditions are right, it looks like life in the universe should be widespread.”

Say we do find life elsewhere, what would it be like? For an informed speculation, click here:

Related
13.8
What kind of intelligence is artificial intelligence?
The initial goal of AI was to create machines that think like humans. But that is not what happened at all.
The Present
What’s effective altruism? A philosopher explains
Some effective altruists “earn to give” — they make as much money as they can and then donate most of it to charities.
Sponsored
How to avoid family fights about money
No family is immune to money conflicts, no matter how much they love each other. Here’s what to look out for.
L&D strategy
Best practices for a needs analysis [Templates included]
Conducting a thorough needs analysis requires care, curiosity, and open-mindedness.
Neuropsych
Memory and the benefits of forgetting
Forgetfulness isn’t always a “glitch” in our memories; it can be a tool to help us make sense of the present and plan for the future.
Up Next
Technology & Innovation
Why Did Twitter Ban A Group Trump Re-tweeted But Not Trump?
The social media company’s new policies only spotlight its arbitrary decision-making process.