Trace a page with your finger and Finger Reader will read it out loud for you. The device, currently in development by the MIT Media Lab, fits on your index finger like a ring. It can be used to assist children, the elderly, visually-impaired people, and second-language learners with reading labels, business cards, menus in a restaurant, prescriptions, or any other type of printed text.

We thought wearing a camera on your index finger would make for a natural interface, because people naturally point at things to ask questions about what’s around them. People with a vision impairment (who constitute 2.8% of the population) also naturally rely on tactile feeling through their fingers to read Braille and gather information about the environment. We speculated that giving them a finger-wearable device that is quick to use and gives them real time feedback would make their lives easier.

Indeed, Finger Reader could make a lot more content instantly accessible to visually impaired people. Currently, only 7% of all books are available in Braille, audio and large print. In a 2009 survey, nearly three ­quarters (74%, 72%) of blind and partially sighted people reported that they could not read the information provided by their hospital or their GP. In addition, things like letters, menus, reports, magazines, rarely exist in Braille. 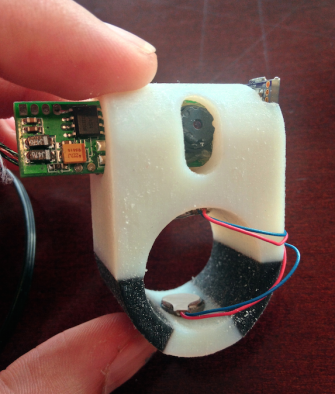 Finger Reader is equipped with algorithms that give real-time feedback as it scans a page. A vibration lets the user know if they need to lift their finger up or down and also signals the end of a line. The device also ensures it doesn’t repeat a line by comparing the words it has already “read.”

Finger Reader is still a proof-of-concept prototype. Watch how it works in the following video and tell us in the comment section where you see applications of the technology.

NASA was dangerously cavalier about the dangers of the shuttle launches.
Up Next

One way to understand a nudge—a government policy that inclines you to make a particular choice, often without your awareness—is that it makes it easier for you to do what […]