Scientists are gearing up for further explorations into space. But normal rockets aren’t going to cut it for missions to places like Mars and beyond. With conventional rocketry, we can make it to the red planet in five months’ time, at its closest point to Earth. Photonic propulsion could be the answer, according to NASA scientist Philip Lubin. He’s a professor of physics at the University of California, Santa Barbara.

Lubin explains his concept in a recent video for NASA 360. He and his team were awarded a NASA Innovative Advanced Concepts (NIAC) grant of $100,000 to outline a roadmap and conduct initial testing. The project is dubbed: Directed Energy Propulsion for Interstellar Exploration (DEEP-IN). Using this method, an unmanned probe could make it to Mars in about three days’ time, at the red planet’s closest point. The plan calls for placing a laser in Earth’s orbit. It could serve another purpose as well, as a defense system, protecting our planet from asteroids.

For propulsion, the system uses a solar sail pushed by the laser. A solar sail is what it sounds like—a thin, lightweight material which fills with photons or light particles reflected off of any surface, and catches them, much like a normal sail catches wind, causing propulsion. There have been two successful tests of such a sail, the IKAROS mission conducted by Japan’s JAXA space agency in 2010, and another by NASA in 2011. 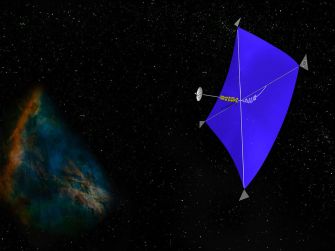 Without the need to carry fuel, spacecraft would be far lighter and travel faster for longer periods, allowing such a craft to reach relativistic speeds, or that which is significant relative to the speed of light. According to Einstein, time would move more slowly for those aboard such a vessel. The closer to the speed of light one comes, the slower time appears.

So how fast would it travel? A wafer-thin probe could move at 30% the speed of light, an “unheard of” velocity, according to NASA scientists. Voyager 1 is currently traveling at 0.006 percent the speed of light, just for comparison. Lubin wrote in a separate paper that, “Electromagnetic acceleration is only limited by the speed of light while chemical systems are limited to the energy of chemical processes.”

The whole project sounds like science fiction right? But Lubin says that the technology already exists, it just needs to be scaled up. That’s important because the first real mission to Mars is planned for 2030. According to Lubin, a 100 kilogram (220 lb.) unmanned robotic spacecraft could make it there in just three days. A manned one would take longer, about a month or so, four months shorter than by current means.

But Mars is just the beginning. Such technology could open up new possibilities for space exploration. At an NIAC symposium in 2015 Lubin said, “Within about 25 light-years of the Earth, there are actually quite a few potential exoplanets and habitable things to visit.” For example, Alpha Centauri is the closest solar system, over four light years away. But according to Lubin, a small probe using photonic propulsion could make it in about 17 years.

This tech is earmarked for small, unmanned spacecraft. Sending AI throughout the galaxy would garner enormous benefits. We could even find other inhabitable worlds. Despite this, there are still significant challenges to overcome. For instance, how would we beam the information back? Communicating with Earth would pose a daunting challenge. Another issue is employing a laser strong enough, and finding ways of slowing the probe down once it reached its destination. 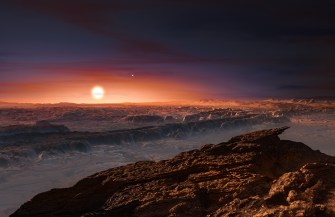 Artist’s depiction of Proxima Centauri b (Proxima b), an exoplanet in the inhabitable zone of the star Proxima Centauri, theoretically reachable using photonic propulsion.

Besides photonic propulsion, other models are in the works. One that has gotten a lot of press lately, the EM Drive, is an electromagnetic acceleration system whose initial test was successful. Yet, no one quite understands how it works. Another is an antimatter rocket, proposed by Positron Dynamics CEO Ryan Weed. Weed, speaking with Wired last year, said such a rocket could “loop the Earth in three seconds.” We could also reach Mars in weeks’ time, rather than months.

We understand photonic propulsion, at least theoretically. And it isn’t so expensive, although it may require a ring of superconducting magnets, like those used in a Large Hadron Collider. Those aren’t cheap. Even so, Lubin’s plan can be developed in a cost-effective manner. So as it stands now, laser-based solar sails are likely to provide humanity’s next evolutionary step, exploring more our solar system, nearby exoplanets and in decades and centuries to come, more of our Milky Way.

To see the NASA video for yourself, click here:

While most participants fibbed a little bit, laptop users were much more likely to lie – and by a lot more.
Up Next
Smart Skills

Is This the Most Dangerous Member of Trump’s Cabinet?

One of the lesser-discussed but potentially most disastrous appointments is in education: Betsy DeVos. Her anti-intellectual agenda would take root in the nation’s youngest minds, filtering down through descendant generations.