If you look at today’s daily doodle on the homepage of Google, you’ll see a cartoon of NASA’s Juno probe successfully entering the orbit of Jupiter. In the image, tiny video-game-like NASA scientists are jumping for joy in the mission control room, and it’s no stretch of the imagination to assume that here, art is certainly imitating life. In the minutes after Juno settled into the orbital path of our solar system’s largest planet, the project’s principle investigator Dr. Scott Bolton congratulated the mission team, saying, “We just did the hardest thing NASA’s ever done.”

Juno launched on August 5, 2011 and after a five-year journey, during which it traversed 1.7 billion miles, it has finally begun its 20-month orbit around Jupiter, collecting images and data, and searching for hints about the massive planet’s creation – hints that scientists hope will give way to clues about the origins of the entire universe.

So why, as Bolton indicated, was this mission potentially the hardest thing NASA has ever done? How many things had to go just right in order for Juno to slide into Jupiter’s orbit, punch-in its time card, and start the work it was designed to do? Bolton’s joy at the mission’s success can be measured in the gleeful ripping up of NASA’s plan B media statement at the recent press conference.

In interviews leading up to yesterday’s success, Dr. Bolton described Jupiter as “a planet on steroids”. For the life of its mission, Juno will have to survive harsh radiation that will eventually destroy its electronic systems, despite being cased in a titanium vault. But things could have gone belly-up long ago, before Juno even got a chance to ride the orbital path.

To give an idea of the ambitiousness of Juno’s journey, Quartz perfectly described the mission as NASA throwing “a tiny object through 1.7 billion miles of space into an area that is only about tens of kilometers wide. It’s like throwing a basketball from London to New York and managing to hit the backboard perfectly to land the ball in the basket.”

To get to where it is now, Juno had to do a lot of things, but it also had to not do some very important things:

1. It had to not collide with a single asteroid in 1.7 billion miles, while passing through, um, an asteroid belt.

2. The mission was haunted by the ghosts of failures past. Thanks to NASA’s Mars Observer spacecraft, which disappeared in 1993, a residual fear that hung over the Juno mission was that the probe might lose communication and fall off the radar. Something seemingly trivial could have sealed a fate much like that of the Mars Observer, which spun out after a fuel leak and vanished.

3. There was also a plausible risk Juno could miss its window of opportunity when entering Jupiter’s orbit. Certainly not a dainty or light spacecraft, Juno was traveling at an incredible speed of 165,000 mph (nearly 100 times faster than a bullet) while being further accelerated by Jupiter’s massive gravity. The probe had to pump the brakes for 35 minutes straight, achieving a mere slowdown of 1,200 mph in that time – but it was just enough for Jupiter’s gravity to capture the probe in its orbit. Sailing past a target is a real and detrimental concern for space missions; in 2010, Japanese spacecraft Akatsuki’s was on-course to Venus when its engine failed to fire properly and it overshot the mark, sailing right past Venus. It had to wait six years to try again.

4. Adding another undesirable dose of danger, Jupiter has a thin but significant ring of debris in its orbit, which made crashing a major anxiety in the arrival stage of the mission. At Juno’s high speeds, even a small particle could have caused significant damage, or derailment. And had Juno not been able to slow down enough or had there been a navigation error that steered the probe too close to Jupiter’s mysterious cloudy atmosphere, the probe could have been torn to shreds.

5. For Juno’s arrival at Jupiter, the mission team switched off every system and instrument of the spacecraft that was not vital to the orbit entrance. In the past, NASA has suffered mission failures due to menial task confusion – a moment of incoordination while the craft tries to pat its head and rub its stomach at the same time – something that happened in July 2015, when the computer aboard the New Horizons crashed as it was passing Pluto, due to nothing more than interpreting simultaneous basic commands.

It’s easy to sit back from a position of relative safety now, doing that all-too-human thing of concurrently torturing and entertaining ourselves with the details of what could have gone wrong. At the end of the day, however, the words ‘rocket science’ are revered in popular culture for good reason. What made this mission one of the hardest things NASA has ever done was five years of nail-biting as Juno dodged danger after probable danger.

In NASA’s eyes, there was and is only one planned and acceptable way for Juno to end its mission: at the conclusion of 20 months, after its 37th orbit, the probe will dive selflessly into Jupiter and destruct. This dramatic measure is scheduled for February 20, 2018, and will ensure that Juno cannot crash into or spread any bacteria to Europa, one of Jupiter’s 67 known moons, speculated to be one of the more probable locations of life in our solar system. 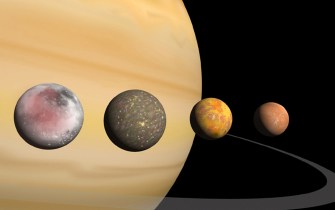 Could no new particles at the LHC be exactly what physics needs?

The ATLAS and CMS diphoton bumps, displayed together, clearly correlating at ~750 GeV. Image credit: CERN, CMS/ATLAS collaborations, image generated by Matt Strassler at https://profmattstrassler.com/2015/12/16/is-this-the-beginning-of-the-end-of-the-standard-model/.It’s the ‘nightmare scenario’ for some. […]