Scientists have discovered another piece of the puzzle in the mystery of the earthquakes that have been happening in such states as Texas, Oklahoma and Kansas since 2008. The researchers are certain the quakes are a result of fracking practices of the oil and gas industry.

In the past decade, Oklahoma, which used to have just one or two earthquakes per year, saw their number rise to more than 800. Texas saw an earthquake increase of 600 percent. Most of the quakes are small but there is potential for something bigger as, for example, Oklahoma had several stronger shakes larger than magnitude 5.

Why are these quakes happening? Scientists have supposed for a while it was a by-product of fracking, a controversial industrial practice that involves pumping a high-pressure water mixture into deep underground wells to break up rocks and release the hidden oil or gas. Now the new seismological study concludes that fracking is the only possible explanation for the swarm of quakes that have hit the Dallas-Fort Worth area. 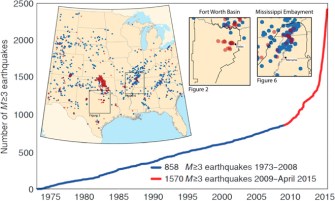 This graphic shows that while both Texas and Mississippi have experienced earthquakes since 2008, the quakes in Texas are on faults that have been silent for millions of years, indicating human activity of recent years has loosened them. Credit: Magnani and others. Sci. Adv. 2017. Vol 3., No. 11, e1701593

By studying a 450-million-year-old fault, the researchers found that there hasn’t been seismic activity there for the last 300 million of those years. That’s until humans showed up.

“There hasn’t been activity along these faults for 300 million years,” said Magnani. “Geologically, we usually define these faults as dead.”

Magnani and her colleagues believe that the faults are disturbed by the injection of wastewater, which disturb weak underground faults. Despite mounting evidence, the Texas government is not rushing to accept any nay-saying on fracking, used by its most lucrative industry.

For their study, the researchers used seismic reflection data, with images created by sound-wave-generating equipment, which sends sounds down into the ground and keeps track of the speeds it takes them to bounce off faults or other rock layers. Earthquake-producing faults exhibit vertical cracks, which serves as a way to tell whether the fault has been active. By comparing images from north Texas to other parts of what’s called the New Madrid Seismic Zone along the Mississippi River, the scientists were able to conclude that the Texas fault has not been producing earthquakes in the past 300 years, unlike evidence to the contrary shown by its counterparts in the zone.

The scientists calculated that the likelihood of there being a natural earthquake sequence in Texas in the past 10 years to be one in 6,000 and one in 60 million for two sequences. Considering that there were five earthquake sequences in Texas during this past ten-year span, the researchers write that it’s “exceedingly unlikely” that they were not caused by human activity.

You can read the study here, published in Science Advances.

Related
Thinking
Creative wisdom from Rick Rubin: embrace your inner gatekeeper
Unlock the full potential of your creativity with “holistic detachment.” This is the way of the editor.
If money doesn’t buy happiness, you’re spending it wrong
These money experts say you can buy happiness. There are some red flags to look out for, though.
▸
7 min
—
with
Lindsay Bryan-Podvin
Starts With A Bang
The path forward for astronomers and native Hawaiians
A history of injustice and the greatest natural location for ground-based telescopes have long been at odds. Here’s how the healing begins.
Thinking
“Give a f***, actually”: The surprising benefits of being grateful for things you dislike
Radical Emotional Acceptance calls on you to celebrate all of life’s emotions — even the negative ones.
Thinking
Visual thinking: How to understand the inner lives of animals
Humans are good visual thinkers, too, but we tend to privilege verbal thinking.
Up Next
Strange Maps
A Map of Russia’s Most Drunk and Sober Regions
The Caucasus is dry, the Far East very wet