The Container Recycling Institute, a nonprofit organization that studies and promotes policies and programs to increase the recovery and recycling of beverage containers, maintains a running count of the number of cans and bottles that have been landfilled, littered, and incinerated in the U.S. this year. At the time of writing this article, the number stands at around 111 billion.

Despite the fact that we’re all well aware of this mounting problem, 93% of the plastic Americans consume never makes it to the recycling can. The good news is that Richard Eno, the CEO of Metabolix, a publicly traded company (MBLX) based in Cambridge, Massachusetts, may have just the solution: Forget waiting for people to begin properly disposing of their Poland Spring bottles and begin making plastic that eventually biodegrades.

In a joint venture with Archer Daniels Midland (ADM), Metabolix is pioneering the production of a family of 100% corn-based bioplastics—sold under the label Mirel—that are durable, capable of withstanding high temperatures, and biodegradable. The secret to its bioplastics are genetically-engineered microbes that produce plastic-like molecules called  Polyhydroxyalkanoates (or PHAs) by consuming sugar from corn. Critics say the success of corn-based bioplastic will present the same long-term problems as ethanol—primarily that they will increase the demand for corn, and thus the cost of the food. Metabolix’s solution? Genetically modify switchgrass to actually grow PHA molecules right within its leaves. 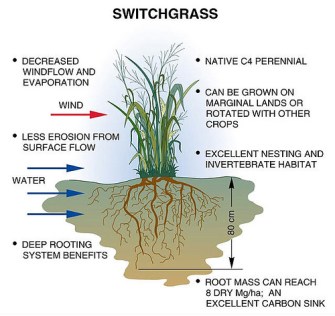 Metabolix has developed a process for making plastics out of switchgrass by combining the genes of several naturally occurring substances. Which genes exactly remains proprietary information, but, according to the company, “feedback from regulatory authorities and other stakeholders such as a local government and growers has been positive and there is a strong interest in this technology as a means of diversifying the agricultural base, utilizing marginal lands, and reducing our dependence on petroleum in a very cost effective manner.”

Though Metabolix’s switchgrass program is still in its development stages, having only been grown under greenhouse conditions, its proof-of-concept bioplastic was made from plants composed of up to 3.7% PHA molecules. Metabolix’s commercial target is to use about 7.5% of the switchgrass plant in making bioplastic and to recycle the remaining plant matter into biofuel. See the picture below for a microscopic view of the plastic-like PHA molecules growing within the switchgrass leaves. 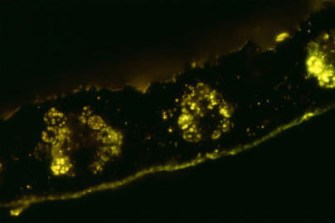 Metabolix expects its corn-based bioplastics to be used in a wide range of applications. They have already begun shipping their plastic pellets to be used in a biodegradable Paper Mate pen. Primarily they are targeting six areas in the near term: compostable bags, agricultural and horticultural products, marine and water applications, consumer products, business equipment, and packaging. As for those pesky Poland Spring water bottles, all Mirel products are “hydrolitically stable”—capable of being in contact with water without breaking down—and two of Mirel’s plastic grades have already received Food Contact Notification from the FDA.

You might wonder why Mirel bioplastics do not begin degrading on the shelf, especially if they are filled with water or stored under high temperatures. The answer is that the bioplastic must be exposed to naturally occurring microbes that actually break down the plastic through an enzymatic process. Without prolonged exposure to the kinds of microbes found in soil or sea water, the the bioplastic remains intact. In composting conditions a 1mm thick piece of Mirel bioplastic takes about 90 days to biodegrade and in marine conditions a 4 mil thick shopping bag degrades in about 80 days.

In light of these conditions, we could dump the 111 billion water bottles that Americans have thus far trashed this year right into the ocean and they would be gone in a matter of months.

— Scientific American article about the environmental impacts of corn-based plastics.

— NatureWorks, Novamont, BASF and Cereplast are some of Metabolix’s primary competitors.

The most common element in the Universe, vital for forming new stars, is hydrogen. But there’s a finite amount of it; what if we run out?
Up Next
Surprising Science

What Is Alzheimer’s Disease?

While much remains unknown about the deadly disease, advances in research have shed new light on its mechanisms, and on how dementia affects the aging brain.