There’s little disagreement about it: Robots and other forms of automation are coming for our jobs. Your job, maybe. According to a McKinsey Global Institute report, some 375 million jobs worldwide will vanish by 2030. An Oxford study in 2017 predicted job losses of up to 47% within 50 years. A report by the U.S. Bureau of Labor Statistics says a startling 1.4 million jobs in the U.S. will be gone in just eight years. After digging through some Bureau of Labor Statistics (BLS) numbers, researchers at CreditLoan have concluded that some 48 billion hours of work a year in the U.S. will soon be done by robots instead of humans. That’s the equivalent of 300,000 working lifetimes — gone. In a Big Think exclusive, CreditLoan has turned the raw data into infographics that help clarify what we should expect.

What about your job?

The CreditLoan researchers supplemented the BLS numbers with their own survey of 1,001 people. They were asked how likely they thought it was that their own jobs would be lost to automation. 54% thought their job was safe. Sorry. CreditLoan’s estimate was far more alarming: Only 3.1% are likely to survive the transition.

Respondents were more on-target in their assumptions that the more education they had, the more likely it was that they stood a chance of not being replaced by robots. 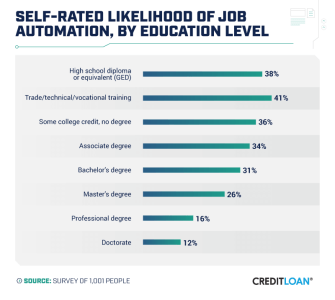 Work most likely to disappear

The researchers focused on jobs that were 95% or more likely to be replaced by automation, along with the hours lost and their equivalent in working lifetimes. This is not to say these are the only occupations in jeopardy — they’re just the ones whose future looks least promising.

Altogether, the researchers estimate the time people currently spend working in these jobs at 48,553,260,000 hours. Here’s a way to visualize what those numbers mean.

Time to chill or panic?

Not everyone agrees with all the dire predictions. Employment expert Michael Bernick suggests the concern is overblown for three reasons. He says:

Still, World Economic Forum asks, “Will this Fourth Industrial Revolution lead to a jobless future for manufacturing or will the ‘traditional’ response of education and training allow workers to remain employable?” They suspect, though, that the exponential advances in technology may simply be too swift for human workers to adapt to.

If this is so, Bernick’s last point is worth thinking about. It implies the prospect of a guaranteed universal basic income (UBI). After all, as robotics bring tremendous economic benefits, what will happen to all of the people left out? Societies are already being torn apart by extreme income inequality as it is. Will the underemployed be left to simply starve and die, or supported through enhanced governmental safety nets? Nations are already beginning to take the idea of a UBI more seriously, though the idea has some tricky aspects. Finland is testing a limited form of UBI. The Swiss soundly voted down a UBI referendum in 2016.

So let’s imagine for the moment that all of these displaced workers will be okay. With over 43 billion additional hours returned to our personal use, what kind of things could we accomplish? CreditLoan has some thoughts. 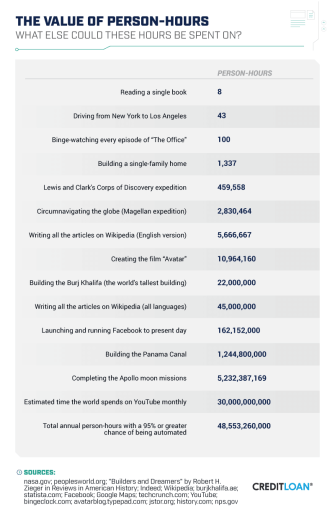 Tell you what: You go ahead and build the world’s tallest building; we’ll re-watch The Office. Or maybe we should all just think about what this next industrial revolution will look like, and, if need be, start cultivating a new career. Right now.

Related
Health
What happens when regular porn watchers abstain for a week?
Researchers watched for signs of withdrawal — but didn’t find any.
Neuropsych
Daily caffeine intake temporarily alters your brain structure
Compared to people who took a placebo, the brains of those who took caffeine pills had a temporarily smaller gray matter volume.
Thinking
Why you should laugh at yourself, according to Seneca and Nietzsche
“It is more human to laugh at life than to lament it.”
Hard Science
The violence of the Tonga eruption is a wake-up call to watch other submarine volcanoes
Out of sight, but not out of mind.
The Present
How circular economics can make us happier and less stressed
Entrenched business wisdom says that community-led economic systems are pure fantasy. Douglas Rushkoff disagrees.
Up Next
Surprising Science
A second Big Bang will likely destroy the universe, Harvard researchers say
Or maybe it’s already begun.