In the year 1770, a chess-playing “automaton” known as The Turk debuted in Vienna, Austria. It appeared to beat humans at chess, losing very rarely. It was actually an elaborate hoax, with a human being as the real champion chess player, manipulating the Turk via mechanical means from inside. 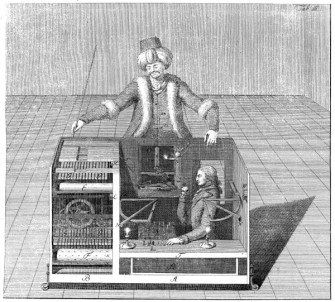 It took another 227 years for an actual computer to beat humans at playing chess in 1997. Now, 22 years later, an A.I. created by IBM—represented by a black box on stage but actually consisting of a group of computers in one of IBM’s data centers—named Project Debater has defeated humans in the art of debate. Twice.

The judges were around two dozen panelists who listened as Project Debater took on Noa Ovadia over her position that governments shouldn’t fund space exploration and, according to the judges, the machine won. Next, it went up against debater Dan Zafrir, with Project Debater taking a position that telemedicine is a good thing and needs to be increased.

In both cases, the arguments were prepared by the computer by researching millions of online articles and documents in real time, after it was presented the subject to argue. Then, it formulated its position, and finally, successfully defended it against attack.

Project Debater closed the telemedicine argument with a bit of humor. “I can’t say it makes my blood boil, because I have no blood, but it seems some people naturally suspect technology because it’s new.”

Aya Soffer, who runs IBM Research’s global Artificial Intelligence (A.I.) team, summed up why the company is working on the project.

“From our perspective, the debate format is the means and not the end. It’s a way to push the technology forward and part of our bigger strategy of mastering language. In general, computers are lagging significantly in understanding and being able to express themselves. If we expect A.I. to be useful, being able to communicate with people is critical.”

Related
Starts With A Bang
The sober truth about finding the Universe’s first stars
The Universe certainly formed stars, at one point, for the very first time. But we haven’t found them yet. Here’s what everyone should know.
Life
Our antidepressant drugs are affecting animals and ecosystems
A toxicologist explains the impacts of antidepressants on fish — and no, they’re not getting any happier.
The Past
Ancient migration: Bering Strait land bridge from Asia to North America was not a one-way road
Ancient humans crossed the Bering Strait land bridge from Asia into North America. But some of them went back.
Sponsored
Want to boost your happiness? Buy experiences, not material possessions
Some experiences continue to pay dividends time and time again.
High Culture
Did Paul Cézanne hide an early self-portrait underneath a 160-year-old still life?
To answer that question, we may have to figure out when the famed painter started to go bald.
Up Next
Embracing Mindfulness for Men’s Health Month
Practicing mindfulness in the workplace is taking businesses and organizations around the world by storm. While some practice mindfulness techniques, others are more involved in the discipline of mindfulness meditation.