Gamers salivated in October of last year when Microsoft released a video of Project X-Ray, a mixed reality video game . A user was seen donning HoloLens goggles and a handheld device. Viewers could see the device turn into a cybernetic gun that encompassed the man’s hand and forearm, as if he was a cyborg. Soon, robots were breaking through the walls and attacking the user who was able to return fire and upgrade his weapon. The room was transformed into a futuristic battle zone. Virtual reality (VR) has come a long way since the 1990s. Today we stand at a tipping point, where VR is about to disrupt so many sectors such as research, sports, the military, education, entertainment, car manufacture, and even healthcare .

According to research and consulting firm IndustryARC, augmented and virtual reality in healthcare is predicted to generate $2.54 billion globally by 2020 . Augmented reality is a mix of the real and virtual worlds, like Project X-Ray. With virtual reality, the entirety of the experience is digital. In healthcare, the two areas these technologies will be most utilized are training and rehabilitation . 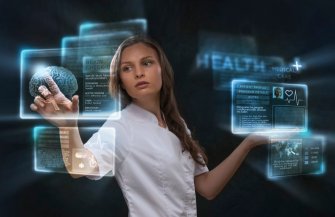 The Royal London Hospital will place its mark on history with a groundbreaking event coming April 14. This will be the first ever live broadcast operation in the world available on smart phone and VR headset. Specialized cameras will be perched high above the operating table allowing thousands of expected viewers to observe a British patient in his 70’s undergo a colon cancer operation. Dr. Shafi Ahmed will be performing the procedure. The viewer will be watching the surgery almost as it occurs, at a mere one minute lag time. Dr. Ahmed is also experimenting with 360 degree cameras. According to the surgeon, the point is to allow medical professionals anywhere in the world the ability to see such videos and use them for training purposes.

Fully immersive 3D operating room simulations could be used to train young doctors in real life situations, helping them to gain experience, become more confident, and be able to make the snap decisions necessary in order to save lives. Some training simulations are already being offered. At the UC Davis Center for Virtual Care, heart catheterization is one of the many simulations available. Cardiologists-to-be perform on a mannequin named “Samantha” to give the student as close an experience to real life as possible, without putting anyone at risk . University officials say the center is not only for training greenhorns but for seasoned pros as well, to fine tune their skills and learn how best to run their medical team. Other virtual training applications include performing a colonoscopy, as well as endoscopic, laparoscopic, robotic, and organ transplant surgery . 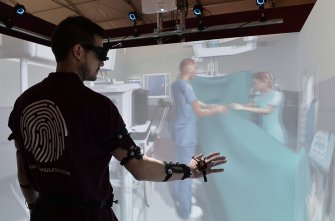 Outside of training, virtual organ models can help surgeons prepare for a delicate or complicated procedure. This is thought to increase precision, decrease complications, and reduce trauma . Sometimes a patient needs a rare, lifesaving procedure the surgeon has no experience in. VR can be used to help the physician understand how to perform one in minutes . In addition to simulations, planning, and training, virtual diagnostics, and research models are on the horizon. VR isn’t just changing the face of medicine for doctors however, but patients as well.

For amputees, phantom limb pain is a serious issue. This is where the brain continues to send signals to the missing arm or leg, causing shooting pains, or a burning, itching, tingling, or electric sensation. Some amputees have even said that they can feel an itch in the palm of their missing hand. There is no way of shutting this phenomenon off .

Researchers at the Chalmers University of Technology in Sweden conducted one experiment with an amputee. They placed electrodes on what was left of the patient’s missing arm. A VR headset was given to the patient, who was able to see that arm guiding a steering wheel as he virtually drove a car. The one patient this technique was tested on reported less pain overall, and even some long stretches without pain at all during the course of treatment. 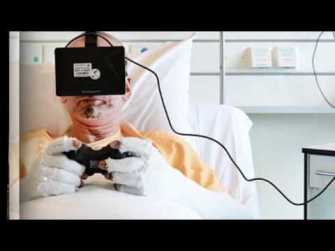 In mental health, VR has already been used to help phobia patients get over their worst fears through exposure therapy. PTSD sufferers have been targeted for VR therapy since the 90s. Now, eye movement desensitization and reprocessing (EMDR), a therapy that allows traumatic memories to be recalled and reframed through certain eye movements, can be combined with VR. But how this will occur is not completely clear. Some hospitals are already using VR to put veterans back into battlefield situations in Iraq and Afghanistan in order to help them understand and come to terms with their memories and move past them.

Breathing control, meditation, and VR games such as Deep, which utilizes biofeedback, help patients relax, control their breathing, and reinforce a positive attitude and so lessen pain. Another VR game called SnowWorld, developed by psychologist Hunter Hoffman, helps patients forget their pain by exploring a magical, snowbound environment drenched in the music of Paul Simon. One 2011 study of soldiers who had endured burns from an IED attack found that SnowWorld was more effective a pain reliever than morphine. In that, it has applications for chronic pain management too.

Other places VR may be used include brain damage evaluation and rehabilitation, social training for those with autism, and help for the homebound and disabled . Though already earmarked for a variety of healthcare settings, applications are just beginning. Soon seamless integration between VR and so many other innovations such as big data, AI, and others will bring the future of healthcare to a medical center near you .

Related
13.8
Why the origin of life and the Universe itself might be forever unknowable
There might be a hard limit to our knowledge of the Universe.
Hard Science
200 years of exploring Antarctica
What we’ve learning from the world’s coldest, most forbidding, and most peaceful continent.
Sponsored
4 misleading personal finance tips
Personal finance advice is often over-simplified and fails to consider economic research or people’s unique circumstances.
Strange Maps
Europe’s stunning digital divide, in one map
Some Europeans really don’t want to use the internet.
Thinking
Bonhoeffer’s “theory of stupidity”: We have more to fear from stupid people than evil ones
Evil is easy to identify and fight against; not so with stupidity.
Up Next
Personal Growth
The sooner you expose a baby to a second language, the smarter they’ll be
Just hearing two languages helps babies develop cognitive skills before they even speak. Here’s how – and how you can help them develop those skills.