Two new studies confirm the discovery of ancestors for a species of hominids, dubbed “hobbits” for their size, filling in a link in the evolutionary chain.

The original “hobbits” (or homo floresiensis) were discovered in 2003 on an Indonesian island of Flores. The skeletons that were found then and in subsequent years allowed the scientists to conclude that a species of hominins that were around 3.5 feet tall existed about 60,000-100,000 years ago. Despite having small brains, these little humans made and used stone tools, hunted and may have used fire.

“The hobbit was real,” said archaeologist and the one of the authors of the studies Adam Brumm from the Research Centre of Human Evolution at Griffith University in Queensland, Australia. “It was an ancient human species that is separate to ours and that no longer exists on the planet today.”

Interestingly, scientists proposed that the hobbits arrived on the island as a larger people and shrank over time, in an process called “island dwarfism,” to adapt to their environment and scant resources.

As the new studies shows, a group of 700,000-year-old fossils, unearthed in Flores in 2014, proves that the hobbits shrank from Homo erectus.

These fossils are of an even smaller people, which means the species must have shrank shortly after appearing on the island. An adult lower jaw fragment from one of the new fossils is 20% smaller than the smallest  lower jaw fragment of the Flores Hobbits found earlier. 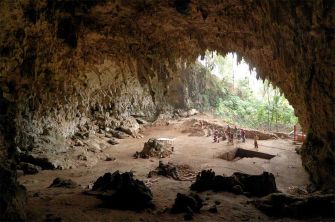 The cave in Indonesia where the findings were made.

The shape and dating of these new fossils suggest they are the ancestors of the H.floresiensis.

“All the fossils are indisputably hominin, and they appear to be remarkably similar to those of Homo floresiensis,” said Yousuke Kaifu, co-author of one of the studies and a paleoanthropologist from Japan’s National Museum of Nature and Science in Tokyo.

You can read the studies in Naturehere and here.

Here’s a video on the Flores Hobbits from the Smithsonian National Museum of Natural History:

Foraging Communities Might Hold the Key to a Healthier World

With threats like climate change looming ever larger, humans might have to go back to the roots to find solutions.