Every time he sees a triangle these days, my 10-year-old son points and says “Gasp! The illuminati!” This is a meme he and all his friends absorbed from YouTube.

It’s interesting that several centuries after the Illuminati first appeared, as basically a idealistic secret boys’ club, followed by the Freemasons, these kinds of shadowy organizations still exert so much power on our imaginations. That’s because power doesn’t always come in the shape of Queens, Presidents, CEOs or Members of Parliament. Often it exists in the more or less invisible relationships between people.

My guest today is renowned historian Niall Ferguson. His new book The Square and the Tower: Networks and Hierarchies, from the Freemasons to Facebook looks at the two ancient power structures that continue to move the world today. 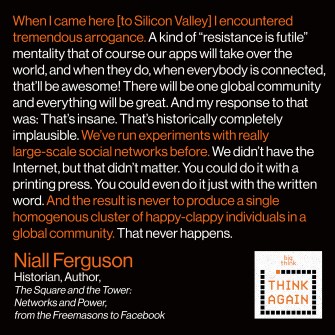 Related
Starts With A Bang
The path forward for astronomers and native Hawaiians
A history of injustice and the greatest natural location for ground-based telescopes have long been at odds. Here’s how the healing begins.
Thinking
“Give a f***, actually”: The surprising benefits of being grateful for things you dislike
Radical Emotional Acceptance calls on you to celebrate all of life’s emotions — even the negative ones.
Thinking
Visual thinking: How to understand the inner lives of animals
Humans are good visual thinkers, too, but we tend to privilege verbal thinking.
Strange Maps
The world’s longest straight line connects Portugal to China
It’s nearly 20,000 miles long.
The Well
This is what the fourth dimension looks like
Left–Right, Back–Forth, Up–Down. What’s the fourth dimension?
▸
3 min
—
with
Brian Greene
Up Next
The Present
Few things are as dangerous as economists with physics envy
Scientists are supposed to reach their conclusions after doing research and weighing the evidence but, in economics, conclusions can come first, with economists supporting a thesis that fits their moral worldview.