Amidst the recent discovery of super-Earth LHS 1140b – one of the “most exciting” exoplanets found in the last decade – a unique scientific crowdsourcing project is about to begin to further advance the search for new Earths. This June, a collaboration between the game’s developer, CCP Games, Massively Multiplayer Online Science (MMOS), the University of Reykjavik, and the University of Geneva, will enable the players of EVE Online to sift through real-world astronomical data and discover new exoplanets.

EVE Online is a space-based massively multiplayer online role-playing game. The incredibly complex and intricate virtual world of EVE is comprised of 7,800 star systems where more than half a million players worldwide engage in activities like exploration, mining, manufacturing, trading, combat, and piracy. In 2013 the game was ranked #12 on PC Gamer’s list of 100 Greatest Games of All Time.

In 2015, EVE Online launched Project Discovery – a fully integrated part of the game that allows the EVE community to work together to provide benefits to real world science and medicine. This human computing power is invaluable for the processing of enormous sets of data that cannot be handled by algorithms. Human data processing is needed in instances like classifying images into different categories or indicating where anomalies are present (e.g., finding stars in an image of the night sky). Unlike algorithms, non-experts can learn to do such tasks proficiently with only minimal, example-based training.

The first project that leveraged the power of the EVE Online community was the Human Protein Atlas where hundreds of thousands of players helped classify proteins from a massive database helping scientists understand protein function in human cells. It took players only three weeks to generate over 25 million image classifications. 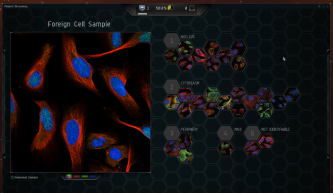 Screenshot of part of the training in which EVE Online players were taught to analyze cell samples.

Now, the European Space Agency will give EVE players access to 167,000 light curve images collected by the satellite CoRoT. The images capture minor changes in light whenever a planet passes in front of the star around which it orbits. By measuring the depth of the dip in brightness and knowing the size of the star, scientists can determine the size or radius of the planet. The orbital period of the planet can be determined by measuring the elapsed time between transits.

Players will have access to tools that will help them eliminate noise from the images and identify potential exoplanet transits. When at least five players have flagged an image for a potential candidate, it will be sent to the University of Geneva for further analysis by scientists, including astrophysicist Michel Mayor – the first man to discover a planet outside our solar system in 1995.

“To date, scientists have found around 30 planets inside the data set,” said Mayor, “We estimate there are around a dozen undiscovered planets still hidden within the images.”

Once the players have gone through the CoRoT data set, they will be given a new one, from Kepler, which was responsible for finding the potentially life-sustaining planets in the Trappist-1 system.

Related
Starts With A Bang
The sober truth about finding the Universe’s first stars
The Universe certainly formed stars, at one point, for the very first time. But we haven’t found them yet. Here’s what everyone should know.
Life
Our antidepressant drugs are affecting animals and ecosystems
A toxicologist explains the impacts of antidepressants on fish — and no, they’re not getting any happier.
The Past
Ancient migration: Bering Strait land bridge from Asia to North America was not a one-way road
Ancient humans crossed the Bering Strait land bridge from Asia into North America. But some of them went back.
Sponsored
Want to boost your happiness? Buy experiences, not material possessions
Some experiences continue to pay dividends time and time again.
High Culture
Did Paul Cézanne hide an early self-portrait underneath a 160-year-old still life?
To answer that question, we may have to figure out when the famed painter started to go bald.
Up Next
Culture & Religion
Discovery of North America’s Oldest Settlement Proves Native Canadian Legend True
The Bella Bella Heiltsuk will use these findings in negotiations over their traditional lands.