Okay, so maybe Western democracy isn’t crumbling after all.

In a potential sign of renewed civic engagement, Facebook just unveiled a new tool called Town Hall that allows you to easily contact your appropriate representatives in one click. On a desktop, just visit the Town Hall site and enter your address. If using your smartphone, simply click the menu and find the Town Hall logo under apps.

Instead of scoring points with caustic political zingers in an exhaustive comment thread, it may be time to move your opinion outside your echo chamber and sent directly to your elected official. Get involved.

Building a civically-engaged community means building new tools to help people engage in a thoughtful and informed way. The starting point is knowing who represents you and how you can make your voice heard on the decisions that affect your life.

The more you engage with the political process, the more you can ensure it reflects your values. This is an important part of feeling connected to your community and your democracy, and it’s something we’re increasingly focused on at Facebook.-Mark Zuckerberg, statement through personal Facebook page on March 27, 2017 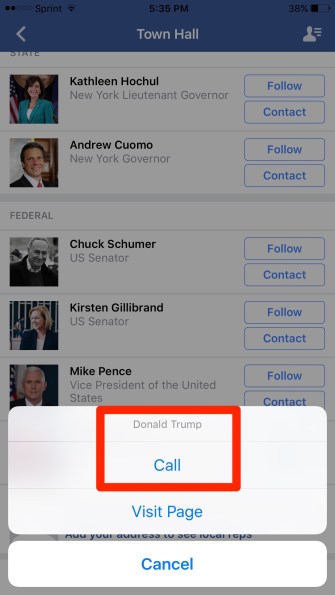 After entering your address and viewing your respective elected officials, the Town Hall tool allows you to contact your politician of choice with one click. Depending on the settings, your message will either go through as a Facebook message, email, or a phone call (calling the phone number listed on the corresponding politician’s Facebook page).

And similar to the contagiousness of “I Voted” stickers and posts, your act of civic engagement will have the option of being shared through your News Feed. 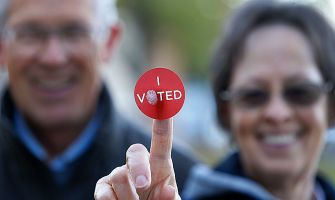 No matter where you stand politically, it seems we can all agree that the election of Donald Trump has been disruptive. Our frustration as an electorate is palpable. The hope for educators and concerned citizens is that the recent presidential election may have reawoken a need for civic engagement.

Instead of merely creating online campaigns, people are physically attending marches and other events. And it’s not limited to certain generations. The New York Times, for example, recently covered the rise of highly-engaged CSPAN-watching high schoolers nerding out on politics (“The Snapchat Cohort Gets Into Politics, and Civics Is Cool“).

While the hope of social media has long been to create an online public square, recent discussions around echo chambers and the spread of fake news has caused a certain level of soul-searching in Silicon Valley. As the world’s largest social network where Americans spend upwards of 50 minutes a day, Mark Zuckerberg and Facebook play an outsized role in our interactions. By releasing Town Hall, Facebook is recognizing its own potential duty or expectation as a social network to provide tools to better enable civic engagement by users. 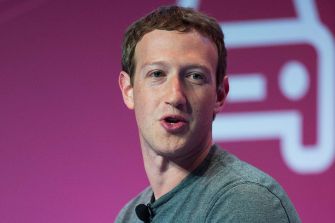 Back in February 2017, Zuckerberg caused a little bit of head-scratching with his assertion that the well-worn Facebook mission needed a tweak. Instead of just connecting people, Zuckerberg was calling for “social infrastructures.” Town Hall appears to be a step in that direction.

“In times like these, the most important thing we at Facebook can do is develop the social infrastructure to give people the power to build a global community that works for all of us.” –Mark Zuckerberg, February 2017

It is widely understood that friction gets in the way of civic engagement. The more barriers one has to vote (taking off work, waiting in a long line), for example, the less likely they are to vote. While some may argue that it is our civic duty to deal with these comparatively minor hardships, it behooves us to remove friction if we truly desire greater civic engagement.

Contacting government officials can seem downright byzantine in comparison to the ease we have in ordering take-out or an Uber. Where is our Civics 2.0? How can digital technologies be leveraged to improve the government-constituent relationship? Apps like SeeClickFix, which was launched back in New Haven, Connecticut in 2007 to better report common annoyances like potholes, showcase the great promise for digital technologies to enhance civic engagement.

Every Christmas could be the last Christmas.
Up Next
Neuropsych

Who Would You Trust More: Your Friend, or a Total Stranger?

Recent research suggests what we thought we knew about social trust judgements may be all wrong.