It’s designed for people who find that a nanosecond is too short, but a microsecond is just too long. Facebook calls it a “flick,” and it’s one 705,600,000th of a second. The word “flick” is actually a contraction of “frame tick,” which offers clue about what a flick is and who really needs a new unit of time.

Well, Facebook, for one, needs it as part of its interest in virtual reality content produced for its Oculus VR division. Christopher Horvath raised the issue it resolves as a question posted to Facebook in 2017. (He now works for Facebook’s social virtual reality division.) 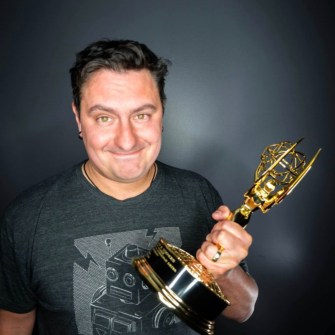 Is this the face of a time lord? Well, yes. Here’s Horvath holding his Emmy for the Oculus film “Henry.” (FACEBOOK)

It’s all about, as Horvath explains on GitHub, the gnarly math often required in the production of film and video. As you know, both create the illusion of movement with a succession of still images, or “frames,” played back in rapid succession too fast for the eye and brain to process as separate stills. The number of frames per second is referred to as its “frame rate.”

There is a dazzling array of different frame rates a person working in film or video may encounter. They range from the traditional movie-industry standard of 24 frames per second (fps), in which each frame lasts for 1/24th of a second, to digital video that supports high-resolution audio of 192 kHz and thus a frame length of just one 192,000th of a second.

The problem is, as Horvath explains, “When working creating visual effects for film, television, and other media, it is common to run simulations or other time-integrating processes which subdivide a single frame of time into a fixed, integer number of subdivisions. It is handy to be able to accumulate these subdivisions to create exact 1-frame and 1-second intervals, for a variety of reasons.”

Working with single frames has been a mathematical nightmare. A frame at 24 fps, for example, expressed in decimal form is roughly .04166666667 seconds, or 41666666.669 nanoseconds. And when you multiply or divide what are essentially estimates like these, your results inevitably become increasingly inaccurate.

Horvath figured out that there’s a number that would allow content creators to work with full integers whose products wouldn’t degrade over successive operations, and that’s a 705,600,000th of a second, AKA the flick.

Using the flick, the math is so much tidier and simpler:

All complete integers. Facebook agreed, and on January 22, Oculus VR announced the new unit on their Open Source page. Just in the flick of time, one might say.

Related
13.8
What kind of intelligence is artificial intelligence?
The initial goal of AI was to create machines that think like humans. But that is not what happened at all.
The Present
What’s effective altruism? A philosopher explains
Some effective altruists “earn to give” — they make as much money as they can and then donate most of it to charities.
Sponsored
How to avoid family fights about money
No family is immune to money conflicts, no matter how much they love each other. Here’s what to look out for.
L&D strategy
Best practices for a needs analysis [Templates included]
Conducting a thorough needs analysis requires care, curiosity, and open-mindedness.
Neuropsych
Memory and the benefits of forgetting
Forgetfulness isn’t always a “glitch” in our memories; it can be a tool to help us make sense of the present and plan for the future.
Up Next
Surprising Science
Dark matter killed the dinosaurs, says a noted cosmologist
Harvard’s theoretical physicist Lisa Randall links the extinction of the dinosaurs to the mysterious “dark matter”.