Elon Musk’s Boring Company plans to build a new tunnel system that would connect residential garages in Hawthorne, CA, to an underground hyperloop via elevator, potentially enabling people to someday enter the futuristic public-transit system by simply stepping into their parked cars.

The company won unanimous approval from the Hawthorne City Council on Tuesday to build a prototype for the system, reports the Mercury News.

To test the prototype, the Boring Company purchased a private residence under which it plans to build the elevator shaft and connect it to a one-mile underground tunnel it has already built in Hawthorne. Interestingly, the company said it plans to rent the home.

Plans indicate that the proposed elevator shaft will lower cars underground where they will attach to a “skate” that connects the car to the hyperloop track.

“It’s an important part of the longer-term vision the company is trying to build,” said company representative Jane Labanowski. 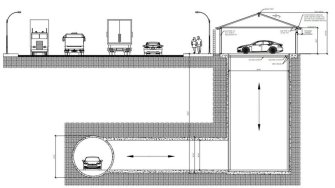 The Hawthorne City Council waived requirements under the California Environmental Quality Act so the Boring Company could proceed with the plans. Other government entities have endorsed fast-tracking the company’s operations in the past.

“What we want to do is show proof of concept and as quickly as possible,” said company representative Brett Horton. “We are not asking to go around the public process. Yes, we do move fast. We are trying to revolutionize transportation and don’t want to get bogged down.”

The new prototype plans seem to differ from Musk’s past statements that the hyperloop would prioritize public over personalized transportation.

In tweets from March, Musk said, “Adjusting The Boring Company plan: all tunnels & Hyperloop will prioritize pedestrians & cyclists over cars.” He added that the tunnels “will still transport cars, but only after all personalized mass transit needs are met. It’s a matter of courtesy & fairness. If someone can’t afford a car, they should go first.”

But, as Labanowski suggested, the new residential garage prototype could be just one relatively minor part of the Boring Company’s long-term plans.

In August, the company proposed building a 3.6-mile “Dugout Loop” that would transport “electric skates,” each carrying eight to 16 passengers from downtown Los Angeles to Dodger Stadium for $1 per trip. Although the plans haven’t been approved, L.A. Mayor Eric Garcetti said it’s a “great example of public-private partnership.”

Related
Neuropsych
Psychology studies that go viral are likelier to be bogus
A new 20-year analysis of over 14,000 psychology studies finds that a study’s media coverage is negatively linked to its replicability.
The Future
How a device transmits radio waves with almost no power
Apart from the energy needed to flip the switch, no other energy is needed to transmit the information.
The Present
Radical idea: Redraw the U.S. map as a nation of city-states
While cities drive national economic growth, their political geography means they cannot effectively deal with inequality, poverty, and other socioeconomic problems.
The Learning Curve
Why do high IQ people stagnate in their careers? Emotional intelligence
Research suggests that emotional intelligence is more vital for success than IQ.
The Present
Even in the age of AI, some problems are just too difficult for computers
Computers are growing more powerful and more capable, but everything has limits
Up Next
Surprising Science
Fighting for open access: Why academic publishers are making a killing
Academic publishers have some of the highest profit margins in the world. In the digital age, researchers are starting to wonder whether publishers actually deserve this much money.