I’m not sure any of the reader suggestions to replace the deeply unpopular term “redistribution” will quite cut it as bumper sticker slogans for the fall election.

But leaving aside proposals from the right — Philopoemen’s “coercive sharing” and Bill J. Canada’s “THEFT,” for example — comments on my last post included a few worthy ideas: “dewindfalling” or “defortunation” (D Backer), “shared productiveness” (Wpk315) and “wellbeing economics” (LHorst), among others.

Of all the suggestions, I’m most drawn to “dehoarding” from reader Andi Mohr. The term accurately describes the problem that has led to the gigantic wealth gap in the United States we see in the pie chart below. Each slice of the pie represents the wealth held by 20 percent of the population: 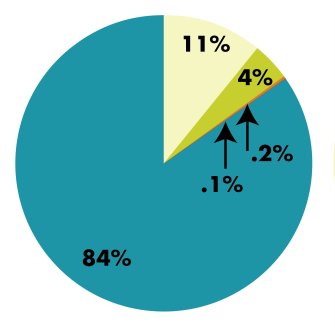 The wealth gap has been growing steadily since the 1970s, but hoarding has exploded in just the past few years. Here is Robert Frank two weeks ago on CNBC:

The 2012 Survey of Affluence and Wealth in America, from American Express Publishing and Harrison Group, finds that One Percenters are hoarding three times as much cash as they were two years ago. Their savings rate soared to 34 percent in the second quarter of 2012, up from 12 percent in 2007.

Higher savings would normally be good for the economy. But not now, when capital is needed to invest in growth and jobs. The One Percenters put 56 percent of their available cash into savings accounts and money markets in 2012 — that’s up from 24 percent in 2007.

They’re investing just 44 percent in financial markets — down from 76 percent in 2007. More One Percenters say the stock market is “a real risk” rather than a “real opportunity.” That’s a big switch from just last year, when 62 percent said the market was an opportunity.

In other words, One Percenters used to save less, and invest more. Now they’re “basically stuffing money under the mattress,” said Jim Taylor, vice chairman of Harrison Group.

OK, so how could a platform of “dehoarding” address this problem? It would probably go too far to require the very wealthy to hew to a state-determined spending/savings/investment ratio. The aim instead should be to reverse decades of policies that have brought the United States to inequality levels last seen in the late 1920s. Here are two proposals to get started:

Even conservative pundit William Kristol finds it “kinda weird” that Mitt Romney paid only 13 percent in taxes on his $21.6 million of income in 2010 while most middle class taxpayers paid a higher effective tax rate. There would be no “economic detriment,” Kristol says, if millionaires paid somewhat higher taxes. 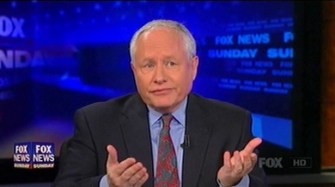 The main reason for the weirdness is a tax rate structure that rewards individuals who earn the majority of their income through investments rather than from wages. The tax rate for stock dividends and capital gains on investments is 15 percent — the rate Romney paid on the “carried interest” he amassed working in private equity — while middle class families pay a marginal tax rate of 25 or 28 percent on their ordinary income. This is nothing but a windfall for the wealthy, and it was introduced in 2003 under George W. Bush.

2. Raise the estate tax to a meaningful level.

While Obama’s tax plan would raise investment tax rates for the wealthy under his so-called Buffet Rule, the President seems to have bought into the Republican position that the estate tax should be minimized. Sadly, the national debate seems to be over how much to limit the estate tax (pitched as the “death tax” by mastermind GOP pollster Frank Luntz) rather than how much to raise it. Romney and Ryan want to eliminate the tax entirely. Obama seeks to increase the estate tax rate modestly (from 35 percent to 45 percent) but only after a $3.5 million exemption. This means a parent can pass along $3.5 tax-free to his or her heirs and the government collects less than half of the remaining fortune in taxes. The Romney kids will share an inheritance of well over $100 million under Obama’s plan.

There are debating points on both sides of this issue when it comes to the federal budget and the impact of the tax on small businesses, but the main virtue of a meaningful estate tax is its efficacy in preventing intergenerational wealth hoarding. Andrew Carnegie, of all barons, saw this over a century ago. Here he is in 1889:

The growing disposition to tax more and more heavily large estates left at death is a cheering indication of the growth of a salutary change in public opinion. The state of Pennsylvania now takes—subject to some exceptions—one-tenth of the property left by its citizens. The budget presented in the British Parliament the other day proposes to increase the death duties; and, most significant of all, the new tax is to be a graduated one. Of all forms of taxation, this seems the wisest. Men who continue hoarding great sums all their lives, the proper use of which for public ends would work good to the community, should be made to feel that the community, in the form of the state, cannot thus be deprived of its proper share. By taxing estates heavily at death the state marks its condemnation of the selfish millionaire’s unworthy life.

It is desirable that nations should go much further in this direction. Indeed, it is difficult to set bounds to the share of a rich man’s estate which should go at his death to the public through the agency of the state, and by all means such taxes should be graduated, beginning at nothing upon moderate sums to dependents and increasing rapidly as the amounts swell…

Governments should not be in the business of specifying an ideal distribution and dividing up the pie accordingly. That’s “allocative justice,” not “distributive justice,” as John Rawls points out. But when a distribution is as outrageously unequal as ours is in the United States today, it’s a sign that something is rotten in the state of the economy. Nobel Prize winning economist Joseph Stiglitz argues that extreme inequality is not only unfair but results in an economy that is “less stable and less efficient, with less growth.”

We must ask which policies are contributing to the inordinate concentration of wealth at the top and take steps to amend them. Farewell redistribution. Let the dehoarding begin.

Can Kenya Make a Run for Economic Gold?

Did you notice Kenya’s surprising performance at the 2012 London Olympics? Take a look at this New York Times infographic of the final medal standings in London – there’s Kenya standing tall […]