Climate change is a serious issue that impacts the future of humanity on Earth. Whatever you may believe is the cause, the amount of carbon dioxide in our atmosphere is rising at an unprecedented rate and impacting our climate.

But for all the doom and gloom such changes portend, a scientist found at least one beautiful side effect of climate upheavals. A study led by Stephanie Pau, a researcher from Florida State University, discovered an unexpected connection between the carbon dioxide in our atmosphere and blooming flowers in remote tropical forests of Panama’s Barro Colorado island. Apparently, carbon dioxide growth is tied to an increase of flowers in these forests.

“It’s really remarkable,” said Pau. “Over the past several decades, we’ve seen temperatures warming and carbon dioxide increasing, and our study found that this tropical forest has responded to that increase by producing more flowers.”

In their paper, published in Global Change Biology, Pau and her colleagues analyzed the record of plant materials collected over 28 years and looked at how such factors as rainfall, temperature, light and carbon dioxide affected the forest’s flowers. What they realized is that “atmospheric carbon dioxide clearly seems to have had the largest effect on the increase in flowers,” explained Pau. 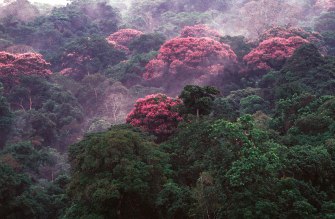 Plants take in the carbon dioxide from the atmosphere and convert it into energy-giving sugars that fuel vital life processes. More carbon dioxide means more energy which is, in turn, used towards more reproductive activity.

Pau predicted that as the carbon dioxide levels keep going up, tropical forests may continue to experience ecological shifts. She saidthat their research shows that the trees are “extremely sensitive to even small changes in their climate.”

A recent United Nations report showed that the amount of carbon dioxide in our planet’s atmosphere is growing at a record pace, reaching a level not seen in millions of years. The concentration of carbon dioxide, a man-made greenhouse gas, reached 403.3 parts per million (ppm) in 2016, going up from 400.0 in 2015, as reported by the U.N. World Meteorological Organization.

Here’s a NASA chart showing the inexorable rise of carbon dioxide thanks to what 97% of climate change scientists say is man-made activity from the middle of 20th century up to now: 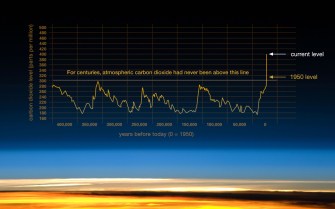 The amount of carbon dioxide is now 45% more than it was at pre-industrial levels and almost twice as much as the levels during recent cycles of ice ages which were followed by warmer periods, say NASA scientists.

Related
Thinking
Finding your essential self: the ancient philosophy of Zhuangzi explained
Adopting a healthy scepticism towards inherited ideas means “emptying the container of the Self.”
The Future
Startup’s bladeless flying car is designed to reach Mach 0.8
One of Jetoptera’s VTOLs is expected to reach speeds of around 614 mph, about as fast as a commercial jet airliner.
Health
New blood types are often discovered following medical disasters
New blood types are regularly discovered by an unusual absence or an unusual presence — both of which can result in tragedy.
The neuroscience of loving music
Humans are musical animals four million years in the making, explained by music expert Michael Spitzer.
▸
8 min
—
with
Michael Spitzer
Life
Scientists use CRISPR to insert an alligator gene into a catfish
Disease kills off 40% of farmed catfish. This gene protects them.
Up Next
High Culture
8 authors who became adjectives: Freudian, Shakespearean, and more
What does it really mean when something is “Dickensian”? Or “Kafkaesque”? Sometimes these words are overused to the point where they lose their meaning. Here’s how these and 6 other words got their origin.