What do you do in the wasteland that resulted from the world’s most infamous nuclear accident? The site of the 1986 Chernobyl nuclear plant’s reactor explosions, which caused dozens of deaths, thousands of contaminations, and a no-humans-allowed zone around the sarcophagus containing the radiation-spewing reactor, might be turned into the world’s largest solar plant.

Ukraine’s ecology minister stated in a recent interview that the idea to build a 1GW solar power farm has generated interest and concrete talks with two U.S. investment groups and four Canadian energy companies. The proposed goal is to generate 1,000MW of solar and 400MW of other renewable energy. In total, this would amount to about a third of the energy generated by the ill-fated Chernobyl nuclear plant.

One major advantage of turning this ghost-town site of the accident into a renewable power center is the abundance of cheap land among the 6,000 available hectares in the 1,000 square mile exclusion zone.

Ukraine’s environment minister Ostap Semeraksaid in a recent interview that:

“The Chernobyl site has really good potential for renewable energy. We already have high-voltage transmission lines that were previously used for the nuclear stations, the land is very cheap and we have many people trained to work at power plants. We have normal European priorities, which means having the best standards with the environment and clean energy ambitions.” 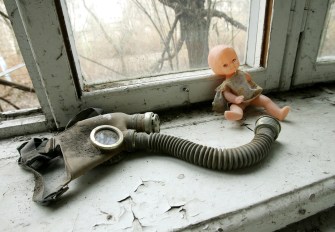 A picture taken 20 April 2006 shows a gas mask near a doll at one of the kindergartens of ghost city of Pripyat, near Chernobyl’s nuclear power plant. (Photo by SERGEI SUPINSKY/AFP/Getty Images)

If a suitable proposal floats up, the European Bank for Reconstruction and Development (EBRD) is ready to lend the money.

“The EBRD may consider participating in the project so long as there are viable investment proposals and all other environmental matters and risks can be addressed to the bank’s satisfaction,” said the Bank’s representative.

As interesting as this idea sounds, who would want to work for months to build such a plant in the still-dangerous zone?

Vodka for your post-apocalypse wingding

It’s made from Chernobyl water and rye. What could possibly go wrong?
Up Next
Starts With A Bang

A visualization of a 3-torus model of space, where lines or sheets in series could reproduce a larger-dimensional structure. Image credit: Bryan Brandenburg, under c.c.a.-s.a.-3.0.Could the secret to understanding gravity […]