Sometimes known as fluid intelligence, cognitive ability is all of the skills needed to succeed in school and advance in one’s career. It’s really considered how well we react when we encounter new information or novel situations. Though we have a good grasp on what it is, finding where it emanates from on the biological side has proven challenging.

Researchers have known for a few years now what genes influence intelligence. In a 2012 study, 20 genetic variants for intelligence were identified by the ENIGMA network, a consortium of scientists combining brain scans with genetic information to gain a better understanding of the brain. Since then, more genetic links to IQ have been discovered, including the KL gene—thought responsible for 3% of IQ variation in the general population. Cognitive ability however, from a genetic standpoint, has been harder to hunt down. 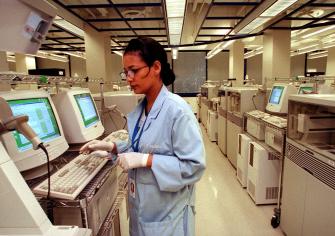 Geneticists are just beginning to unravel what genes are associated with our cognitive faculties. Credit: Getty Images.

Traditionally, there’s been a strong argument that fluid intelligence comes mainly from the nurture side of the human experience. After all, two studies conducted across a number of different countries have shown that having books in the home and access to highbrow culture improves a child’s scholastic achievement significantly. Despite this, a 2013 University of Texas study discovered that 50-70% of variation in human cognition is attributable to our genes. But it gets more complicated.

In the UT study, the authors wrote that “genetic influences on cognition are maximized in more advantaged socioeconomic contexts.” These genes are either activated or suppressed depending on what environment a person grows up in. What’s become clear, in these and other studies, is that human cognition is complex,and isn’t likely the result of one particular location, but multiple ones throughout the genome.

One of the problems is, many studies use a volunteer pool that’s way too small to really tease out subtle genetic influences. Access to a vast number of genomes is likely to give us a better picture of what genes are involved in cognitive ability. It would also let us know whether they operate in some sort of network or individually.

Todd Lencz, Ph.D., recognized the small sample problem from previous work. So he led a team from the Feinstein Institute for Medical Research in Manhasset, NY, in a massive project. It included 107,207 participants. This is what researchers call a genome-wide association study (GWAS), which here examined cognitive ability.

Genes exert a heavy influence on a person’s potential cognitive ability, but environmental factors either activate or suppress those genes. Credit: Getty Images.

Volunteers underwent a battery of psychological tests before donating their DNA. Then their genomes were sequenced and the data compared to that of a database containing the genetic information of 300,000 other people. Each person’s highest level of academic achievement was also noted. Researchers say it’s a reliable metric for cognitive ability. As a result of their efforts, Dr. Lencz and colleagues were able to identify 27 loci and 350 candidate genes for cognitive ability. Their results were published in the journal Cell Reports.

Those with certain neuropsychiatric disorders have been known to exhibit mutations or deletions at some of the loci recognized in the study, lending greater credibility. “The field of genomics is growing by leaps and bounds,” Dr. Lencz said. “Because the number of genes we can discover is a direct function of the sample size available, further research with additional samples is likely to provide even more insight into how our genes play a role in cognitive ability.”

GWAS have tremendous potential, and thanks to better research techniques and greater computer processing power, they’re becoming more common. Another interesting aspect, researchers looked for potential drug targets. They believe they’ve identified a certain receptor which could offer a pharmacological pathway to increasing our cognitive potential. 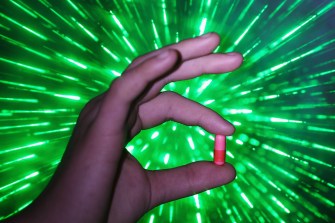 We may someday be able to create a drug that increases cognitive ability. Credit: Getty Images.

It wasn’t all good news. The more cognitively spry among us are also more privy to autoimmune disorders, such as rheumatoid arthritis, Crohn’s disease, celiac disease, and eczema. It’s also important to note that what we normally think of as intelligence is actually a collection of a number of different traits blended together. Each has a genetic origin that needs to be hunted down and analyzed. The more knowledge we gain on the genes and genetic networks involved, the more we’ll be able to tweak our own species for greater intellectual capacity. Such research may prime us for greater longevity as well.

Lencz and colleagues were able to tease out certain traits related to these genes. It seems those with a higher cognitive ability might be predisposed to living longer. The scientists found a lot of overlap between the loci for cognitive ability and those for longevity. Could we also find a way to boost our lifespan through this research as well? Though it’s an interesting speculation, it’s too soon to tell.

To learn how to bring your cognitive ability up to the next level, click here:

Related
Strange Maps
The horrors of World War II air war, in one stark map
This graph shows how badly German cities were hit by Allied bombing raids.
Hard Science
Subatomic ghosts shed new light on the structure of protons
A Fermilab study confirms decades-old measurements regarding the size and structure of protons.
The Present
The Taoist philosophy behind Alibaba, China’s e-commerce giant
Alibaba has played a key role in China’s meteoric economic rise.
The Well
Can we condition ourselves to be heroes?
Neuroscientist Robert Sapolsky on the science of temptation, and the limitations of your brain’s frontal cortex.
▸
6 min
—
with
Robert M Sapolsky
Thinking
3 brain games to practice deductive, inductive, and abductive reasoning
Take a closer look at the different types of reasoning you use every day.
Up Next
Hard Science
Scientists reverse the arrow of time in quantum systems
A team of researchers reverses the arrow of time in quantum experiments.