How well can you evaluate how other people make decisions? This might be an inherent quality, according to a recent joint MIT and Harvard University study. It found that babies just 10 months-old can tell what you’re goal is and how motivated you are to reach it. The results were published in the journal Science.

When setting a goal, we do a cost-benefit analysis. How much effort are we investing and what benefit will we acquire? Is the benefit worth the cost? It’s surprising that children so young can go through such a complex process. Previous research has focused on older children and adults and their ability to evaluate other’s efforts and goals. Here, investigators at the MIT-Harvard Center for Brains, Minds and Machines (CBMM), wanted to know how young we develop this ability and how it comes about.

“This study is an important step in trying to understand the roots of common-sense understanding of other people’s actions,” Josh Tenenbaum said. He’s a professor at CBMM and a co-author on this study. “It shows quite strikingly that in some sense, the basic math that is at the heart of how economists think about rational choice is very intuitive to babies who don’t know math, don’t speak, and can barely understand a few words.” Tenenbaum worked with Harvard psychology professor Elizabeth Spelke, CBMM postdoc Tomer Ullman, and lead author Shari Liu. 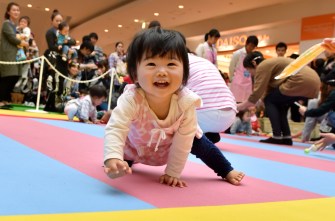 10 month-olds have an intuitive sense much like that which underlies rational choice. Credit: Getty Images.

So what expectations do these babies have and how do they go about evaluating the efforts of others? CBMM researchers set out to specifically measure whether babies could calculate the value of a goal, taking into consideration the effort exerted to attain it.

Computer models have been developed by scientists over the past decade to evaluate how older children and adults puzzle together other people’s intentions, beliefs, and goals. Here, researchers developed a computer simulation that 10 month-olds could understand, and from it infer a person’s goals. It also allows for the calculation of effort put in to attain it.

Tenenbaum and colleagues showed 10 month-olds videos where a cartoon character tries to reach another. In one, the protagonist tries to leap over a wall of varying heights. It first jumps over a low wall, then one of medium height, and finally, a high wall. Next, the children encountered a scene where the protagonist had to choose between two goals, an easy one or one of moderate difficulty.

Older children and adults often chose the second goal. Working harder for it means it’s more worthwhile, the assumption goes. Researchers reproduced this experiment but with the main character having to overcome different obstacles, such as having to leap over gaps of varying sizes. The conclusions were always the same.

To evaluate infants’ intuition regarding what other people value, researchers showed them videos in which an agent (red bouncing ball) decides whether it’s worth the effort to leap over an obstacle to reach a goal (blue cartoon character). Credit: MIT News/the researchers.

Babies this age stare for a long time when they’re astonished. Researchers found that they stared longer when the effort was easy rather than when it was at a moderate or difficult level. What they found was, babies believe the efforts and goals of others should be consistent and that the harder the goal is to achieve, the more worthy the reward to follow. Infants can tell how much a person values something by how much work they put into it. Researchers believe this capability is certain a type of intuition.

These are the youngest subjects who have ever been tested for this ability. “Babies of this age seem to understand basic ideas of Newtonian mechanics, before they can talk and before they can count.” Prof. Tenenbaum said. “They’re putting together an understanding of forces, including things like gravity, and they also have some understanding of the usefulness of a goal to another person.”

Tenenbaum also works on AI. He said a greater understanding of the mechanisms behind this phenomenon could help us develop more sophisticated A.I. Of course, we’re nowhere near building such an A.I. system with the understanding of even your average 10 month-old. “But,” Tenenbaum said, “if we can understand in engineering terms the intuitive theories that even these young infants seem to have, that hopefully would be the basis for building machines that have more human-like intelligence.”

Unfortunately, we still don’t understand how infants develop such intuition. A future study by these same researchers’ plans to evaluate whether younger babies, around three months-old, have this capability and through this, perhaps we’ll start to unravel how it works.

To learn more about how babies learn and how you can use this to your advantage, click here:

Related
Life
Scientists use CRISPR to insert an alligator gene into a catfish
Disease kills off 40% of farmed catfish. This gene protects them.
Neuropsych
How you breathe affects your brain
Your breathing rhythm influences a wide range of behaviors, cognition, and emotion.
Health
What happens when regular porn watchers abstain for a week?
Researchers watched for signs of withdrawal — but didn’t find any.
Neuropsych
Daily caffeine intake temporarily alters your brain structure
Compared to people who took a placebo, the brains of those who took caffeine pills had a temporarily smaller gray matter volume.
Thinking
Why you should laugh at yourself, according to Seneca and Nietzsche
“It is more human to laugh at life than to lament it.”
Up Next
Technology & Innovation
Lab-Grown “Clean Meat” is Almost Here. Will You Eat It?
Lab-grown, cultured meats, dairy, and leather will be hitting shelves soon. Paul Shapiro reports on the coming trend in his new book, Clean Meat.