The robot revolution is on the horizon. Most science fiction, if they don’t portray them slaughtering us en masse, which many scientists say is unlikely, see robots as our friends, coworkers, servants, and perhaps even lovers. Yes, sex robots already exist, and there is more and more talk about them. One report says that they’ll be commonplace by 2025. In another case, a professor claims humans of the future are bound to lose their virginity to them, to avoid awkward social ramifications which could otherwise be experienced.

There’s an important aspect missing from all of these conversations. Ever notice that human-like dolls are creepy? As robots become more and more like us, the Uncanny Valley theory takes hold. This is the theory that the more human-like an artificial creation becomes, the more disquieted we feel, until we are utterly repulsed by it.

We are barreling toward a future where robots are prevalent. Studies have shown that they’re more relatable when they have certain, human-like qualities.  So how can we design robots that we’ll enjoy interacting with, rather than be disturbed by? That’s the big question and although there are indicators, we don’t really know yet.

Japanese roboticist Masahiro Mori first noticed this phenomenon in 1970. He coined the phrase uncanny valley and even developed a chart for it. Today, animators and video game programmers must be aware of the uncanny valley, if they want their creations to be appealing to consumers, rather than off-putting. 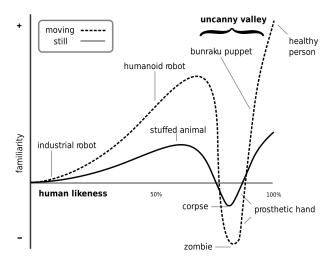 As we get closer to portraying humans artificially, both onscreen and off, interest in the uncanny valley has increased. In 2004, just 35 academic papers mentioned it. By 2015, some 510 papers did. Scholars argue about from where it emanates and why it even exists.

According to cognitive scientist Ayse Saygin of UC-San Diego, little is known about the phenomenon. “This is one of those cases where we’re at the very beginning of understanding it,” she said. “I think the key is that when you make appearances human-like, you raise expectations for the brain. When those expectations are not met, then you have the problem.”

One theory is that we get freaked out when an inanimate object begins to look and act like it’s alive. Another is that it has nothing to do with the physicality of the thing. Instead, people get weirded out when they start to wonder if robots think, feel, or experience life as we do. The idea of a robot possessing a mind and feelings, diminishes our lofty position in the world, one we’ve never had to share with any other sentient beings before. 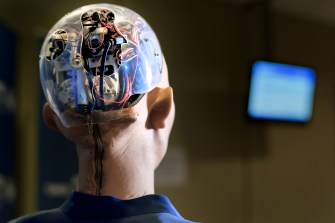 Some psychologists speculate it’s the idea of robots having minds that freaks us out. Getty Images.

The last theory is the dissymmetry between the appearance of the robot and how it behaves. For instance, we feel icky when a robot’s speech doesn’t match up with its facial expressions. We know at our core something isn’t right and it gives us that sinking, queasy feeling.

There are theories outside of these. They’re just the leading ones. For instance, Dartmouth psychologist Thalia Wheatley told Scientific American, “Evolutionary history has tuned us to detect minor distortions that indicate disease, mental or physical problems.” So robots may just be tripping our defenses accidentally, setting off alarms attached to circuitry developed over “…millions of years of evolutionary history.”

In 2013, researchers found that surprising noises emanating from the lower part of the robots face was considered particularly creepy. It may suggest a pattern of behavior often exhibited by those with psychopathic tendencies. One of the most fear inducing expressions, studies have found, is a smile pasted below angry eyes. It looks as though the person is trying to suppress negative feelings. Or is a serial killer. Take your pick. 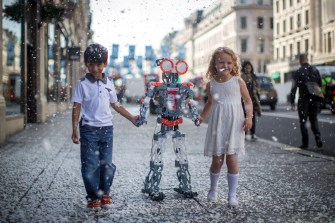 Perhaps a non-human approach is best until human-like robots are perfected. Getty Images.

Eventually, roboticists predict that their machinations will be so advanced, they’ll be indistinguishable from humans. This is the premise of science fiction writer Philip K. Dick’s story, “Do Androids Dream of Electric Sheep,” which was made into the film, Blade Runner. Here, rogue replicants who escape the work camps off world, blend into society on Earth. When they are picked up by the authorities however, they’re deactivated. But not before they’re given a psychological exam to prove they’re not human.

We’re nowhere near that point, yet. But progress on AI and robotics is expected to bring them out into the real world, more and more, within the next decade or so. Exactly how they’re rolled out is going to determine whether the population accepts or rejects them.

When Pixar was developing the first Toy Story movie, it looked to an earlier short called Tin Cup, which used similar CGI. In this smash hit’s predecessor, the human character was considered a turnoff to audiences. Wheatley says roboticists can learn a lot from Pixar’s approach. “We have to nail the human form or not even go there,” she said.

Related
Thinking
Finding your essential self: the ancient philosophy of Zhuangzi explained
Adopting a healthy scepticism towards inherited ideas means “emptying the container of the Self.”
The Future
Startup’s bladeless flying car is designed to reach Mach 0.8
One of Jetoptera’s VTOLs is expected to reach speeds of around 614 mph, about as fast as a commercial jet airliner.
Health
New blood types are often discovered following medical disasters
New blood types are regularly discovered by an unusual absence or an unusual presence — both of which can result in tragedy.
The neuroscience of loving music
Humans are musical animals four million years in the making, explained by music expert Michael Spitzer.
▸
8 min
—
with
Michael Spitzer
Life
Scientists use CRISPR to insert an alligator gene into a catfish
Disease kills off 40% of farmed catfish. This gene protects them.
Up Next
Starts With A Bang
Ask Ethan: How close are we to a Theory of Everything?
The four fundamental forces might have been just a single, unified one in the very early Universe. Could that be true?“Those who begin coercive elimination of dissent soon find themselves exterminating […]